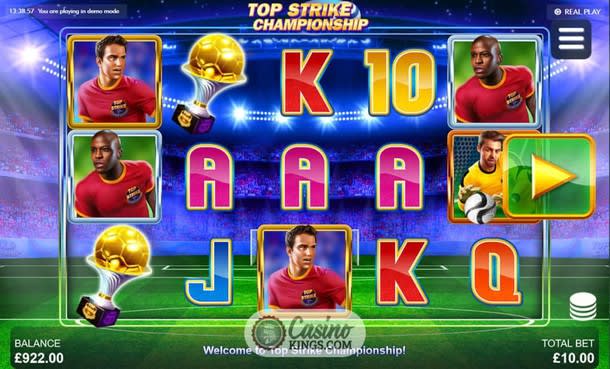 It’s time for the World Cup and it’s time to get in on the reel action and play to win 250,000 coins times your winning wager. The Top Strike Championship slot has five reels, 20 paylines and a spectacular bonus feature.

The World Cup is coming and for millions of people around the world, both casual onlookers and avid followers of the game, this will be the event of the year. The best teams of all continents (or at least those that managed to qualify) will appear in groups and play each other to make it to the knockout stage. Soon enough we'll know who is going to be the new football champions of the world.

Meanwhile, before and during the tournaments, sports betting enthusiasts will place their bets on one or more teams to win in various bookies games. But for those who want to get in on the World Cup action before it even starts, NextGen has produced the Top Strike Championship slot with entertaining gameplay in an imaginary World Cup championship that has a grand prize of 250,000 coins. That is right, the jackpot will not be won by the football players, but by those who get in on the reel action.

NextGen knows how to design themed slots to perfection. Even though Top Strike Championship slot doesn't mention any players by name and doesn't try to make any close resemblances, it still plays like a true football-themed slot machine.

Top Strike Championship slot has a five-reel, three-row reel-set that displays on a background of a grand football stadium, filled to the brim with revellers. The atmosphere of the slot machine captures the atmosphere of an important live football match shown on television. Making a winning combination is accentuated by flashes and really cool animations. Pretty much everything in this game is alive, except the players.

The most exciting feature about Top Strike Championship slot are the winnings and we will dedicate a special section to that. The symbols that lead to the winnings are divided on low-valued and high-valued. The first category has the cards number ten and the face cards jack, queen, king and ace. The next set of symbols in the same category include items that football can't be played without a referee's whistle, a pair of football boots and a pair of goalkeeper gloves.

The high valued symbols are - and here comes the not so glamorous fact - imaginary players who have been made to appear as if they are really into the game, having taken a full attentive posture and the such. Their shirt colours are different between the main game and the free spins feature, but that is a small difference. The most valuable symbol of this category is the player in the red shirt who pays 750 coins times the total bet.

How to Play Top Strike Championship

The game has fixed paylines and one set for the total bet. Needless to say, all the attention is on the big screen (or your tablet or mobile device) and all it takes to play is simply tapping the Spin button. As for the coin size, that is, the total bet, the range starts at £0.20 and goes to as much £100.00 per spin.

How to Win Top Strike Championship

Besides the high and low valued symbols, we have the special symbols that are connected to the bonus features and expanded winnings. The World Cup statue symbol is the Scatter and unlike in most other online slots, this symbol gives a lot more free spins. Is it because of the World Cup vibe that seems to be all around, is it just that NextGen and the online casinos are being super generous with this game?

We'll leave that for the players to decide, but at any rate, landing three scatter symbols provides ten free spins; four scatters bring 15 free spins, and five of these symbols will bring about a total of 20 games.

This feature is awarded during the Free Games only, as Golden Tickets are placed on reel five during the rounds. Once the Golden Tickets symbol lands, the player gets the Treble Bet Bonus. Now comes the really fun part. The player can select three of six teams to stake the Treble Bet Bonus. It can happen that all of the selected teams make it in the Knockout Stage according to the random outcome generator. If no wins occur, the player gets to resume his remaining free spins. What makes the Top Strike Championship slot bonus so lucrative is that the bonus can be retriggered during the Free Spins and, the winnings can be anywhere between 5x to 14x times the total amount of the winning bet.

So far, the Top Strike Championship slot takes the cake from all similar football-themed online slots. This five-reel machine brings with it entertaining gameplay, superb graphics, a concurrent topic and an absolute winner of a Bonus Feature. So why not join us for a spin on the Top Strike Championship slots and play for the top prize of 250,000 coins!? Just in time for the World Cup, our casino affiliates reward our players the best promotional packages that are hard to miss.