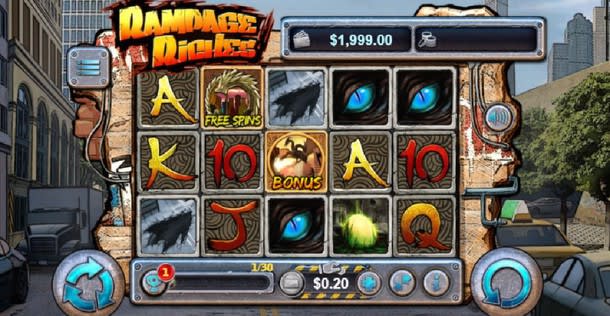 Odobo may not be one of the most renowned online slots developers, but the company has produced some remarkable games in past few years, including Rampage Riches slot, a game inspired by the iconic Godzilla film. Odobo don’t develop the games themselves, instead, they provide a platform for up-and-coming developers and companies in order to help them launch their games and introduce them on the market. Rampage Riches slot was created by Lost World Games.

There aren’t many games with a similar theme, but it sure looks amazing and remarkably refreshing. You will see a lot of interesting things on the reels in Rampage Riches. It is definitely a game that will catch your attention, especially if you are looking for unusual and unique games. Odobo has partnership deals with some of the leading slots sites, so you won’t be short of places to play Rampage Riches slots.

The atmosphere on the reels gets quite hectic but that only makes the game more interesting. You will notice that the background looks quite realistic, even though the theme is fantasy. The cars else that you can see behind the reels look like elements from a video game and there are plenty of interesting effects happening on the reels as well.

The game features five reels and three rows with 20 paylines, all of which are active at all times. The buttons and the other accompanying elements placed on and next to the reels are built into the reels and match the game theme as well.

How To Play Rampage Riches

The buttons and all control options in Rampage Riches slot are quite easy to use and every button is marked by a symbol which shows its purpose and use quite clearly. On the right side, just right off the last reel, you will see the play button. It is large and easy to stop, which makes sense since this is the most important and the most commonly used button.

On the opposite side, just left of the first reel is the autoplay button which you can use to automate your gameplay. Just bear in mind that all subsequent spins, once this option is activated, will be at the same stake that was set when you pressed the autoplay button.

Speaking of the stake, you can set it with the plus and minus icons located below the third and the fourth reels. Even though all paylines are active during every spin, the stake isn’t determined per spin. You can increase and decrease the amount that you wish to wager per game.

The minimum stake in Rampage Riches slot is 20p, whereas the maximum is £20. If we calculate the stake per payline, you can play this game with just a penny per winning combination and a maximum of one quid. Next to the plus button, there’s a full-screen button which is really handy if you wish to see the reels closer to you.

How To Win Rampage Riches Slot

The symbols in this game include standard cards that are low-value symbols such as 10s, Jacks, Queens, Kings and Aces, as well as higher-value symbols which include a green egg, a footprint which looks like Godzilla’s footprint, claws, a rather scary eye. In addition to the symbols, you will also see some interesting thematic characters, like King Genma, a Tyranazoid, as well as Chronos and a few more.

There are more than a couple of bonus features in Rampage Riches slots.

First, we have the Exploding Wilds. This feature is triggered by the exploding wild symbol. Whenever it appears on the middle reel it can turn up to five additional symbols into wilds.

The Rampage bonus is triggered when there’s a special bonus symbol on the first, the third and the last (fifth) reel. In this bonus game, you will have the chance to choose from five different monsters. The battle of the monsters goes on and on, and if you manage to progress through the upper levels you will have the chance of winning more valuable prizes.

Below the first and the second reels, you will notice a bar and that is the achievements bar. There are plenty of achievements that you can unlock, and the progress is displayed on the said bar. For instance, when you trigger a bonus that is one milestone, playing through 100 spins is another and so on.

Finally, last but not least, we have the free spins. This bonus feature is triggered when you get the free spins symbol on the three middle reels. You will need at least three symbols to trigger this bonus. You will get to play five free spins, and there are extra wild symbols on the reels in free spins mode. If you hit additional free spins scatters during the bonus game, you will be awarded extra spins.

Rampage Riches slot sure is one of the most original slot games, with amusing bonus features, vivid graphics and a unique theme. Powered by Odobo, the game is available at plenty of sites, and it can be played with just 20p. The largest jackpot that you can win is 1,000 coins. All in all, it is an exciting game and it is easy to see why it is so popular.