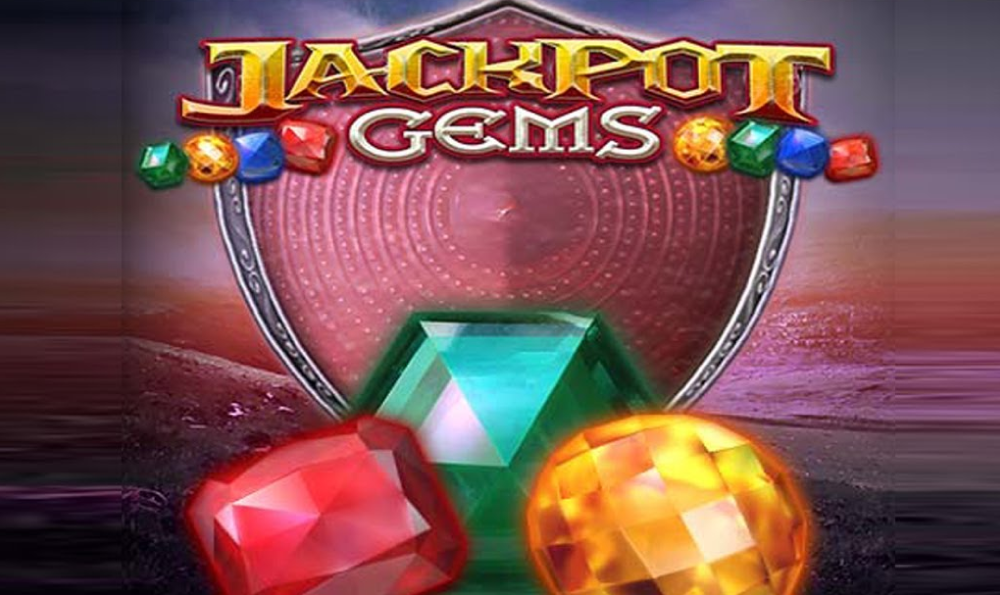 Play to win a spectacular and generous Jackpot Gems slot featuring a winner bonus feature and a Return to Player of 96.10%. This gem-themed slot will keep you entertainment with the four-way split screen filled with winning combos.

Gems are small, shiny, sparkly marvels produced by the forces of nature. Gems are also an endless source of inspiration to slots producing studios who can't help it but churn out spectacular slots machines, such as Jackpot Gems. While this is not the most popular gem-themed game out there, Jackpot Gems slot is still appealing to those of us who relish in things that sparkle and shine. In addition to the graphic allure of its lustre, Jackpot Gems slot has bonuses and other features that can produce real gems in your account.

The graphics of this slot seem just a tad out of step with similar contemporary slots. Truly, there are many slots machines that make the gems seem almost real but that should not turn your off from playing Jackpot Gems slot thanks to the generous return to the player. The five-reel three-row playtable provides straightforward entertainment and a gambling experience that is on par with any of the popular slots out there. The gems do shine and sparkle because they have been made with attention to detail. The facts are distinguishable and glean over when landing on the reel for a winning combo.

All of the settings are at hand's reach and allow you to set your betting preferences to your game style. When you start hitting the big prizes you can switch easily to higher wager amounts to test how generous Jackpot Gems slot is. The sound is not too spectacular nor is it boring. You will hear the familiar sparkling sounds and gentle exclamations that let you know when you have scored.

How to Play Jackpot Gems Slots

When it comes to reel action, this slot is both entertaining and exciting, owing to the winning odds and the extra game mode. The symbols are a variety of gems coming in different shapes and colors, each having a different value. Scoring three like gems across a payline will give you a winning amount  according your wager. In that regard you can bet as little as 10p and as much as £200, which gives a nice range for the players with different preferences. If you are in the mood for a high stakes play you can set the bet among the higher increments and provoke to your favor the slot's Return to Player probability.

What is peculiar about Jackpot Gems slot is the absence of Wild and Scatter symbols, but that should not worry anyone because the Bonus Feature compensates and do so well. Instead of these symbols, which are part of almost every slot machine out there, the Jackpot Gems slot has the Colossal Reel bonus.

This feature can be activated with every spin of the reels that lands a matching combination on more than one reel. In the event, the screen will be divided in four and all the reels will spin at the same time, which increases the probability that you will score a higher winning combination. Upon completing the rounds that you have been given, a golden-pink shield appears where you can choose to either collect the won amount or go for additional Action Spins, or you can simply purchase additional action spins with the money in your account. This feature allows you to take your luck to a different mode whenever you want because there is the option to active the Epic Spins and buy additional ones.

Jackpot Gems gives you the option to gamble your winnings. This is not your typical guest the color game, but more elaborate and with a different sort of prize. The gamble feature takes you to a screen with four reels. You can choose to spin each reel to reveal a prize, which can be a multiplier ranging from 2x to 10x or a miss. Scoring the large multiplier can improve your winnings by a lot, but you would have to gamble more of your earnings.

How to Win Jackpot Gems

The Return to Player of Jackpot Gems slot has been set at 96.10% which just on the border of being favorable. Despite not being set at 97.00%, the Return to Player probability is extended thanks to the bonus feature of four-way split screen that increases the winning potential thanks to the additional reels at play. With this kind of RTP the Jackpot Gems slot counts among medium variance slots that sits well with those who want to play longer rather than take just few spins just for kicks. The upside is that the Free Spins feature can be extended by purchasing additional rounds at will. This means scoring a good winning combo will receive its adequate multiplier, thereby increasing the return on your wager.

As we already mentioned, Jackpot Gems is relatively hard to find online, therefore we have selected two of the best sites that you can play it at.

Paddy Power are the giants of the industry, and the bingo site among the ones with the most experience. Present in the gambling world since 1988, Paddy Power started off as a land-based bingo, but as the technology moved further, they were one of the 1st to include their games online as well.

Find Jackpot Gems Slot on their page with a lovely user experience and juicy prizes.

Another pretty big bingo site is Betfair Bingo, and this one comes in a package with the perfect user interface, one of the most outstanding welcome bonuses that can be found in the online gambling industry, and a pretty awesome choice of games if you think you need something else than Jackpot Gems slot.

The RTP percentage tells you how much a game returns, as it is indicated by the phrase itself – return to player. But, that still doesn’t say much. You’ve probably noticed that the RTP is expressed in percentage points. So, what do we really mean when we say that a game has an RTP of 95%, for example – is a legitimate question.

When a game has an RTP of 95%, that means that out of all funds wagered on the game, the casino and bingo sites that feature it, return 95% as winnings. Sites that offer the game have no influence over the RTP, the percentage is set previously, by the game developer. Some game providers set higher, whereas other companies may set lower RTPs on their games, but there are also differences between individual games.

For instance, the Jackpot Gems RTP may differ from the RTP of another game, even if it was developed by the same online game software developer. In this particular case, the Jackpot Gems RTP is 96.10%. That means that out of the total sum of funds that have been wagered on this game, all operators who offer the game return about 96.10% to the players as winnings. Of course, the returns are completely random, some player may have wagered £10 and lost most of it, whereas somebody else might have won £1,000 with a wager of £20.

That’s why we say that the RTP figure is theoretical, it is always calculated on a large number of games, not just a few spins. Speaking of the particular RTP for Jackpot Gems, we need to say that it is rather favourable, as 95% is usually considered to be the average RTP percentage for slot games. While 96.10% isn’t too high, it is quite good.

Betfair is one of UK’s leading online bingo, betting and casino operators. Moreover, Betfair also operates a sports betting exchange, pools betting, as well as online poker. The site is available in multiple languages and players can access all services from a single platform.  New players who register with Betfair Bingo can claim a special £25 Welcome Bonus. The bonus funds are divided into two groups, £15 can be used to purchase bingo tickets, whereas the remining £10 are reserved for playing slots. Jackpot Gems is just one of the top slots available at Betfair.

Paddy Power merged with Betfair few years ago, but the newly founded entity kept the separate brands, so you will also be able to play Jackpot Gems at Paddy Power Bingo where you can get an even better Welcome Bonus. Here with £10 you will get £25 to wager on slots and £10 in bingo tickets.

Paddy Power Bingo operates a number of bingo rooms, including the special Deal or No Deal bingo room where you can play an exclusive bingo game based on the popular game quiz show of the same name.

Surely, you can find another gem-themed slot in our casino but you won’t find the unique bonus feature that comes with Jackpot Gems slot. Otherwise, this slot’s gameplay is upbeat and entertaining, so even if you are playing just for kicks you may still get a pleasant surprise. The Return to Player of 96.10% is more than decent but calls for a playing strategy, such as shifting between high and low betting amounts every few spins, but that is up to the player to determine. As for concluding words, it goes without saying that this slot is well worth the try, so come along and test your luck in the colorful world of sparkling gems.