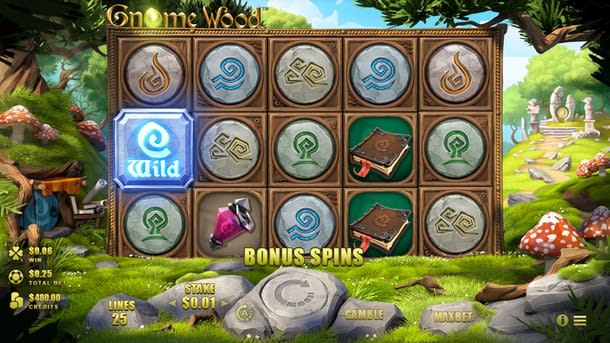 It is not difficult to guess what Gnome Wood slot is all about, even if you have never heard of this game before. While there are quite a few games based around a similar theme, this game features a unique graphic design and few intriguing bonus options. All in all, Gnome Wood slot is a refreshing and original game, and we have to say that Rabcat has done a pretty good job with this one.

Rabcat is based in Austria, and the company works closely with Microgaming and their Quickfire platform. It can be said that mythical, fantastic and historic slots are their speciality, as they have developed few such games, some of which have become pretty successful, like Castle Builder. Gnome Wood was released in the summer of 2017 and became popular in the following months. It is still in demand and it is available at a number of online casinos and bingo sites, including some of the bingo operators available on Bingo Scanner.

Nobody will be surprised that the Gnome Wood slots reels are set into the woods. You’ll see red mushrooms with white dots, a grassland and few trees. You’ll notice that the buttons are blended in the layout, and everything is well arranged.

The music fits the narrative perfectly, the soundtrack is rather idyllic, and you will feel like you’re lying on a carpet of grass and flowers somewhere in an enchanted forest. The symbols are in line with the other visual elements and in accordance with the theme. The game has five reels and three rows and there are 25 active winning lines.

How To Play Gnome Wood

Look at the stones below the reels, all the buttons that you need are placed there. It is really handy, both aesthetically sound and quite practical too. The play button is placed on the largest stone and next to it you will see the autoplay button featuring the letter A. The available autoplay options are 10, 25, 50, and 100 spins.

If you activate the autoplay, all spins will be played at the stake that was set when you clicked on the auto spin, so be careful if you want to set the game on automatic, check that you have selected the right stake amount.

Speaking of the stake, you can adjust it via the stake button which is left of the play and the autoplay buttons. The stake is set per payline, so if you choose to wager a penny per payline, the overall wager would be 25p. With 10p per payline and you will be playing with £2.50 per game. The maximum wager per payline is £2, which sets the total wager at £50. The wagering limits make Gnome Wood slots perfect for players who prefer lower wagering limits, although there might be better options for high rollers.

If you wish to wager the maximum amount you can just press on the max bet button. Between the max bet and the play button, there’s a gamble button and this is only available after a victory, so more on that below. In the bottom right corner, there’s a settings button and it will prompt a menu where there are other options available. Here you can toggle the music off, you can activate the keyword shortcuts and change the coins mode.

How To Win Gnome Wood Slot

You must get a minimum of three instances of the same symbol across a payline to get a win in Gnome Wood. There are ten standard symbols and a few additional special symbols. The three stones with different signs inscribed on them are the symbols of low value in this game.

The remaining symbols pay a lot more, so you can get as many as 20 coins for three instances of the most valuable symbol, whereas with four such symbols you will win a total of 200 coins. With five high-value symbols across a payline, you can win from 100 up to 1,000 coins. In addition to being a substitute for all standard symbols, the wild can also generate a 1,000-coin win if five instances of it are placed across a single payline.

In addition to the standard wild symbol, there’s also a wild symbol with a multiplier. The scatter symbol has the words ‘free spins’ written on it.

If you get the wild with a multiplier to complete a winning combination, the amount that you have won will be doubled. Otherwise, the multiplier wild plays the same role as the normal wild symbol, it can replace all symbols except for the scatter.

In addition to the standard wild and the multiplier wild, there are wandering wilds, and both the standard and the multiplier wild can be wandering symbols. When such a symbol appears on the reels it triggers the Bonus Spins game. In this game, you will be getting re-spins as long as there are wandering wilds on the reels. After each spin, all present wilds will move towards the leftmost reel. The re-spins will continue as long as there’s at least one wild.

At least three free spins symbols activate the free spins game in Gnome Wood slot. The free symbols can be anywhere, they don’t need to be on a single payline. Wandering wilds will appear during free spins and additional three scatters during free spins will retrigger the bonus, i.e. you will be awarded extra free spins.

After every win, you can activate the Gamble game. During this feature, you have the chance to double your winnings if you choose the right cauldron – the copper one or the golden one. You can keep playing until you win five times in a row, or your winnings reach £10,000.

Gnome Wood slot will give you a chance to walk through an enchanted wood featuring gnomes and other magical creatures. Some hefty prizes can be won, and the game has a pretty high RTP – 96.16%. All in all, it has all the elements that you can expect from a high-quality slot game.