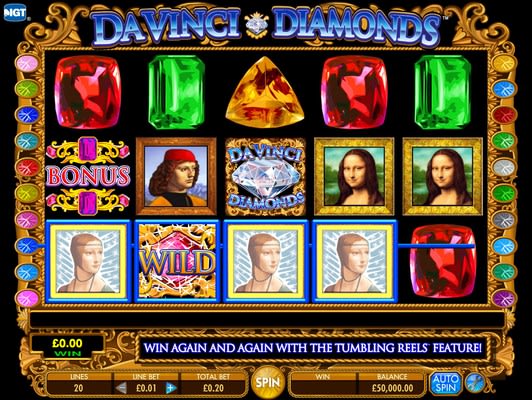 There are many slots games where diamonds and precious gems, and jewellery in general, are the main theme, but this one features an interesting twist, namely Da Vinci Diamonds slot is a game by IGT where some of Da Vinci’s masterpieces join shiny diamonds on the reeks, and your goal is to try and form as many winning combinations as possible.

It has been a while since IGT released Da Vinci Diamonds slot, but the game is still played and loved by players, so it is still available at plenty of online slots sites, but also at various bingo sites. If you wish to know more about Da Vinci Diamonds keep reading this review, we discuss every possible issue in relation to this amusing game.

The game graphics looked quite crisp at the time when Da Vinci Diamonds slots were released, but we mustn’t forget that this game came out back in 2012, so you can’t expect features that are as advanced as the ones you could see in contemporary games that have been released in the last few years.

It is a bit difficult to describe this game in words since they say that a picture is worth 1,000 words, and there are plenty of famous pictures that appear in Da Vinci Diamonds slots. Casino games, slots particularly, have never been considered as artistic and refined, so this one is a nice and refreshing change, as it’s a really artsy game.

The background is dark, but the overall outlook is quite colourful, featuring diamonds in various colours, as well as paintings and the reels themselves are dark red. Visually, the game has a renaissance look and feel, but that’s pretty much self-explanatory, after all, it is based on the most renowned artist and scientist from the Renaissance.

How To Play Da Vinci Diamonds

Da Vinci Diamonds slot features five reels and three rows and there are twenty paylines, so in that respect, it isn’t too different from most other online slots that you can play at the sites featured on BSC.

The game can be played with a minimum of just 20p which is a penny per line, whereas the maximum amount that you can stake per spin comes to £100, or £5 per payline, so it can be said that this game suits both high-rollers, as well as players who like to take it easy and aren’t willing to risk too much in terms of wagering.

You should be pretty careful when it comes to setting your stake though. One rule of thumb is that you shouldn’t wager more than 1% of your total wager per spin, or at least try not to wager more than 2%. Still, that is up to you and you can decide how you want to play, just make sure that you understand the risks.

Below the reels, you’ll see the spin button and to the left are the line bet options. The plus and the minus button can be used to alter the stake. The auto spin button is to the right of the spin button, below the rightmost reel and if you click on it, the reels will be spinning without your additional interference.

How To Win Da Vinci Diamonds

You will need to get at least three symbols on an active payline to win in a Vinci Diamonds. The winning amounts, as per the paytable, are multiplied by the stake per line, not the overall stake. Interestingly, the diamonds are the symbols of lower value in the Da Vinci Diamonds slot, except for the game logo featuring a diamond is the most valuable symbol in the game.

All diamonds have the same value, so if you get three instances of the red, the green or the orange gem you will be awarded ten coins, whereas for four symbols you will get 30 coins. Finally, last but not least, the payout for five diamonds across a payline is 100 coins.

Da Vinci’s paintings are more valuable, you’ll get 300 coins for a combination of five Cecilia Gallerani symbols, 500 coins if the symbols across a payline are instances of the Portrait of a Young Man. The eternal Mona Lisa is there as well, and she will reward you with 1,000 coins if she appears across all five positions on an active payline. Finally, the game logo is the most valuable symbol in the main game and it pays 5,000 coins for a combination of five symbols on a payline.

Free Spins is the main bonus feature in the Da Vinci Diamonds slot. You will trigger it when you get at least three scatters on a payline. The standard tumbling reels feature is active during the free spins bonus game, but there is no multiplier.

You will notice some additional changes in the bonus game as well. Namely, here you will see different symbols, the three gems are of different colours here and the portraits are also different. In the free spins game, you will see the Portrait of an Unknown Woman, the Virgin of the Rocks and the Madonna of the Yarnwinder.

The bonus game can be retriggered if you get scatters in one or more of the free spin games and you can play up to a maximum of 300 free spins.

Da Vinci Diamonds is a game with a very unique theme, that has been one of the most popular slots for quite a while now. The game RTP stands at 94.94%, which is pretty close to the average return rate for online slots. If you wish to play Da Vinci Diamonds, register at one of our bingo sites, claim your bonus and start playing.