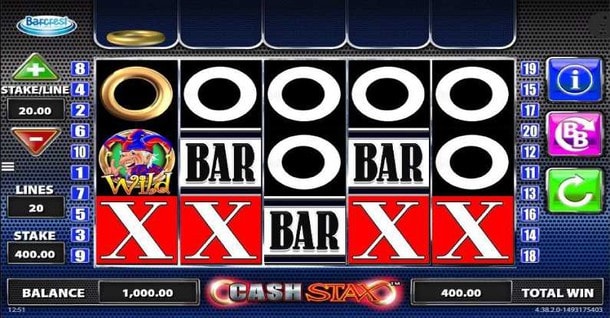 No Max Bet and Autoplay

Online video slots coming from Barcrest tend to be very recognizable due to their design and gameplay. Cash Stax slot is one such game since it is a mix of a standard slot machine and online slot. It also features big, clear symbols, Barcrest’s Big Bet and a bonus feature with a creative design. Cash Stax plays out over five reels and a total of 10 fixed paylines.

The minimum and maximum bet for the bet per spin are set at £1.00 and £500.00, respectively. You can spin the reel set with such stake amounts for the chance to win the game’s jackpot of 50x your total stake. Cash Stax slot comes with a variable RTP rate of between 94.12%-98.14%.

As already stated, Cash Stax is Barcrest’s take on classic slot machines. It is designed with five reels and 10 fixed paylines and comes with a wild and bonus symbol.

The black reels of Cash Stax are placed inside a simple white frame with the paylines visible on the sides. This reel set is placed against the backdrop of a metallic background that reminds of classic slot machines.

It has only one bonus feature, Free Spins round that can get you a maximum of 25 spins, and a 5x multiplier. Cash Spin has an optional extra, the Big Bet Game, during which you pay a bit more and receive a certain amount of spins on a reel set with thirty paylines for bigger rewards.

All symbols in the game are on-theme and represent a symbol from classic slot machines. The standard base game symbols in Cash Stax include red sevens, BARs, big white crosses and big white noughts. The noughts, BARs and sevens award payouts for combinations of three, four and five matching symbols on a payline, while the white nought awards nothing.

The game includes two additional non-standard symbols. The jester is the game’s wild symbol and can appear stacked on the reels. It can also substitute for all other symbols, except the gold nought scatter symbol.

The gold nought is used as the games scatter symbol and is used to trigger the game’s free spins round. It is also used during this round to get you wins and multipliers.

How To Play Cash Stax

Operating Cash Stax slot is very straightforward because all buttons are placed on the sides of the reel set. This is also the case because you need to set only one variable before pressing ‘Spin’.

Since the 10 paylines in Cash Stax are fixed, the only variable that you need to adjust is the ‘Stake Per Line’. By pressing the red minus and green plus arrows of the ‘Stake Per Line’ box, you can set your total stake per line for the spin. You can bet as little as £1.00 and as much as £500.00. This makes Cash Stax slot suitable for players of various bankrolls.

Once you’ve done this, you can set off the reel set by pressing the green ‘Spin’ button which is placed on the bottom right side of the reel set.

Since this is a take on traditional slot machines, Cash Stax offers neither a max bet button nor an autoplay feature in the game.

How To Win Cash Stax Slot

Payouts in the base game of Cash Stax slot are awarded by landing combinations of matching symbols on the paylines.

The bonus and scatter symbol do not award any symbol payouts but take part in different features of the game. The jester wild symbol can substitute for all other symbols except the white and gold nought symbols.

The gold nought is the game’s scatter symbol which is used to trigger its main bonus feature. It also takes part in the action of this bonus feature.

As stated in the text above, Cash Stax slot has only one bonus feature which is described below.

The Cash Stax Free Spins round is triggered by landing at least one of the golden nought scatters on each reel on any spin of the reels. The number of noughts is transferred to the area above the reels and their total number will be the number of free spins you’ll get. You can receive a maximum of 25 if all reels are full of stacked golden noughts.

The spins start automatically and each additional golden nought landed on the reels will award an extra free spin. If you land enough golden noughts to fill up the meter to the right of the reel set, then your wins will be multiplied by x5, which is not an easy task. Once the spins end, the round is over.

Cash Stax online slot has an optional extra feature which allows players to pay a bit more and receive five spins on a reel set with thirty paylines. This means that players have the chance of receiving bigger rewards. The good thing here is that the free spins round can also be triggered by the Big Bet game.

Cash Stax slot is Barcrest’s quite successful take on classic slot machines. It displays the quality and creativity that Barcrest puts in all of their online slots. The slot comes with an RTP that increases to 98.14% by opting to play with the Big Bet option. This gives you the chance to win big, so it’s definitely worth the try.

Give Cash Stax a try and claim your welcome offer from Bingo Scanner!