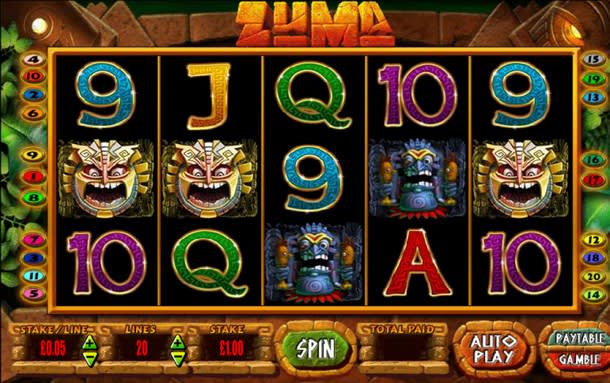 Available on desktop and mobile devices

Zuma slots is a five-reel game that features a spectacular bonus game and lots of multipliers of your winning wager. Claim your welcome package and play Zuma slot for the top payout of 10,000 credits.

Blueprint Gaming had decided to make a tiki mask-inspired online slot and they’ve succeeded in making a pretty cool and entertaining five-reel game. The Blueprint Zuma slot has all the markings of the said theme and manages to deliver entertaining gameplay that includes multipliers, a scatter, a wild symbol, bonus features, as well as an RTP of 95.74%.

One caveat regarding this title is that it is a different game from the one that has the identical title but is made by the company IGT. That out of the way, we can resume with the introduction of a really cool slot game that has been out since 2002. By now it has received millions of spins across casinos around the world, and that includes both online and land-based slot venues. This is a testament of a good game and the Zuma slot certainly is one that still manages to capture the attention of the players.

The idea behind Zuma slots comes from that addictive arcade game that became so widespread on mobile devices that today there are more than 20 different spin-offs, besides the official editions that were released by the gaming company itself. Zuma features that cute, smiling frog which lets its presence known during the bonus feature where the player’s objective is to destroy some tiki masks and reveal the total amount of the multiplier on the winning wager.

Besides that, the cute froggy is working hard to deliver bigger and better winning combinations as the scatter symbol, which is also responsible for the bonus feature. There is a lot more to Zuma than this, so read on and get the additional insight, as well as the ‘how’ regarding where to claim a welcome package to play the Zuma slot.

The game's design features are very cool thanks to the designers' efforts into the graphics and gameplay. The high-valued symbols of the various tiki masks have been drawn and rendered to depict a real, full-blown tiki mask as if they are part of a ceremonial dancing circle at a Pacific island village wedding.

The masks depict various animals or deities and are a kind of hard to describe in writing about what makes them different. The difference that really matters at the end are the payouts, so landing a combination of five matching symbols gives a range of payouts starting at 150 and up to 500 credits multiplied by the winning wager. The game’s low-value symbols are the cards letters and numbers that start with nine and end with ace, which are drawn with somewhat less detail in mind, but still, they don’t break with the game’s overall seamless graphics.

Although the symbols are inanimate during the base spin, once part of a winning combination they spring to life and create a flurry of sparkles and stardust. During the bonus game where you need to shoot a tiki mask, the masks are pretty alive alright, fidgeting in a place like wound-up toys and that's a funny spectacle to experience for the several seconds that it lasts, or until you launch the marble to reveal the number of free spins.

At any rate, the Zuma slot game has amazing graphics that are pleasing to the eye and contribute to the overall excellent gameplay.

How to Play Zuma

Setting up to play the game is pretty easy and straightforward. The first order of business is to determine the coin size, which can be anywhere from 1 penny to £1.00. The selected amount for the coin size will multiply across the paylines which are twenty in number, but since they are not fixed, you can use the up and down arrows to set the number that you prefer.

The "Stake" field lets you know how much you would be spending per each spin. So if you decide to play just one penny per payline you would spend £0.20 per spin. There is no need to do the math in your head, just fiddle with the settings and you will get to the amount that seems reasonable or preferable for you to play per each spin. Of course, if you change your mind you can always re-configure the settings.

How to Win Zuma Slot

When it comes to winning the game, Zuma has a nice array of surprises in store. First of all, let's just make known what is true for all online slots. These are games of chance and the gameplay is not based on skill. The luckiest players win big, and luck may or may not visit upon your game every time you choose to play. At any rate, the Zuma slot does provide some additional details that bring in more punch to the game for the lucky players.

The Zuma wild symbol is the one that brings the top payout of 10,000 credits times the wager and on top of that when landing a combination of five. When the Wild makes a winning combination, it can substitute for any other symbol except the scatter and can deliver a multiplier on the win of up to five times.

The Scatter symbol of the Zuma frog is responsible for triggering the bonus feature. Landing three, four or five scatters invites the bonus and takes you to a new game mode where the frog is on a reel that appears to be a dinosaur spine (weird but cool) and the objective is to hit the tiki masks with marble to reveal the number of free spins. Once the number of the free spins is known, the bonus feature starts and here the Wild symbol still counts as that and also retains its multiplier ability.

Paddy Power is one of the best bingo sites with Zuma, and they are definitely one of the biggest actors in this industry. Their bingo site is among the best ones you can find, we guarantee you that.

They have been formed 30 years ago as a land-based bingo, but with the forthcoming and domination of technology, their focus and business shifted into the online world, and they are the 1st to include games online. If you want to play this online slot, then you should not continue to look for bingo sites with Zuma, cause Paddy Power is the best.

What is there not to like about the Zuma slots? The game has a cute layout, entertaining gameplay and a familiar setting, being a spin-off of the Zuma mobile game. The payout of 10,000 credits is pretty awesome, but the bonus games are what takes the marbles away.
Spin to Win at one of the great online slots venues from the list by claiming your welcome package today.