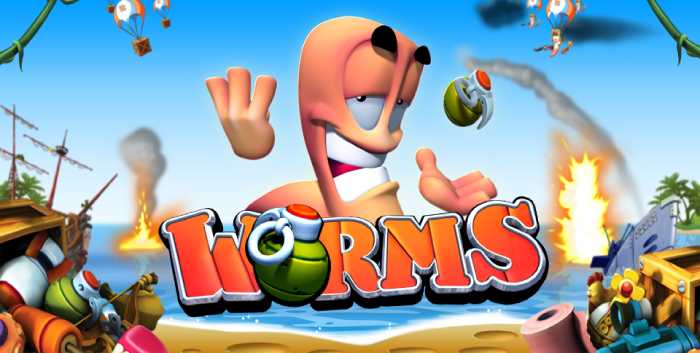 - Not suitable for low rollers

Worms slot is Blueprint Gaming’s tribute to one of the defining games of the 1990’s. The game comes with a reel set of five reels and 50 fixed paylines with graphics borrowed straight from the original video game. Together with the original creators of the game, Team 17, Blueprint gaming made the slot version with a stake amount ranging from 50p a spin to £250 a spin. You can spin the reels with such stake amounts for the chance to win the game’s jackpot of 20x your total stake. Worms slots comes with an RTP rate of solid 95.00%.

As stated in the opening section, Worms is a five-reel and fifty fixed payline slot coming from Blueprint and Team 17, the creators of the original Worms PC game. With Team 17 as their partners, the graphics in the slot are taken straight from the original game. You can see the familiar explosions and parachuting worms in the background while a martial soundtrack accompanies your gameplay.

It has a multi-level Worms Bonus feature triggered by the Angry Scot Worm, Space Worm and Drill Sergeant Worm. These symbols can get you various prizes.

The reels are placed inside a metallic frame with the paylines, or winlines, presented on the sides of the reel set as bullets. The logo of the game is placed atop the reel set.

A scared worm is the wild symbol which can also appear stacked on the reels making it possible to get big wins if the right combination is landed. The Worms crate is used as the bonus symbol helping you trigger the main feature.

How To Play Worms

Worms slot is a very straightforward and easy-to-play game since all buttons are placed at the bottom of the screen. This is also due to the fact that you need to set only one variable before pressing ‘Spin’.

Once you’ve done this, you can set off the reel set by pressing the green ‘Spin’ button in the bottom right corner of the screen.

The game offers no Max Bet feature, so you’ll have to select the maximum bet per spin manually by going through all available coin sizes. The feature that is available in Worms is the Auto Play option which is on the left of the Spin button.

How To Win Worms Slots

Payouts in the base game of Worms slots are awarded by landing combinations of matching symbols on the paylines.

The highest symbol payouts in Worms slots are awarded by the wild with £0.50, £2.00 and £10.00 for three, four and five matching symbols, respectively. If you manage to fill all positions on the reels with wilds, you’ll get a payout of £500.00.

The crate bonus symbol appears on reels two, three, four, and five, and by landing at least three you’ll trigger the bonus feature. You’ll need to select one of the crates on offer and you’ll get one of the following bonus rounds:

You’ll get to spin the reels for the chance to win free spins and cash amounts. You should also keep an eye to the following symbols on the centre reel:

Extra wilds are also added to the reels during the spins, but if your health reaches zero, the round ends.

During this round, you’ll need to work your way along a bonus trail collecting constantly increasing multipliers. By selecting one of the toolboxes on the right, you’ll get either an ‘Advance', or a weapon. Advance will move you forward the trail, while if you get hit by the weapon the round will end.

In this bonus round, you’ll pick from the displayed crates on the sides of the Scottish worm. Each of the crates will hold a prize, a weapon or health. You can collect prizes until your energy is depleted by weapon hits. You can partially restore your energy with the health kit.

So, when you play Worms in free play you will have access to all options and all game features that are available to those who play with real money. You could activate the bonus features if you get the relevant symbols on the reels, and you can even adjust the wagering level, even though you aren’t playing with real money.

If that sounds complicated or confusing, it’s not. Basically, in demo mode you get virtual funds that can be wagered just like real funds. You can experiment with your virtual funds in Worms free play, increase and decrease your wager as you wish. This will enable you to set realistic expectations and know how the game works, so that you’ll be ready when you decide to play with real money.

Worms slot is an excellent game from Blueprint. Due to the fixed number of paylines, it may not be suitable for low rollers. The game’s RTP is solid 95.00%.

Give Worms a try and claim your welcome offer from some of the bingo sites promoted at BingoScanner!