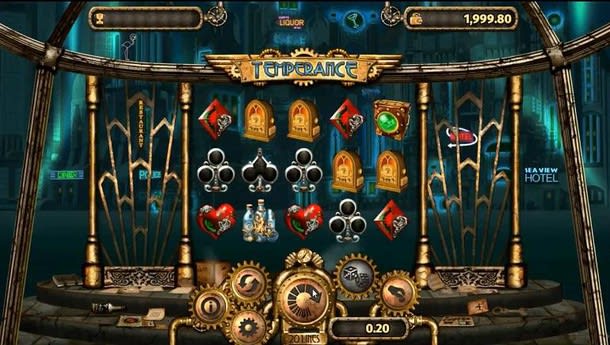 There are plenty of ideas that have been used as a basis or a theme for online slot games. In fact, it is hard to find an idea that hasn’t been used already. As a result, slots designers and developers have to get more and more creative with the games and come up with all new ideas or very original adaptations if they want to make their games look unique. Temperance slot is one of the latest games, based on a rather original idea with an enticing storyline.

It is already available at a number of online slots sites, as well as several bingo sites and players enjoy its gameplay and particularly the exciting bonus features – Free Spins and Survival Bonus. Keep on reading this full and detailed review to find out everything about this game, including the number of reels and paylines, symbols, wagering limits and a lot more.

The underlying feature of the game theme is steampunk, but there are also quite a few futuristic elements. As a result, the overall appearance of Temperance slot looks both like the game is set in New York during the prohibition, as well as some distant time in the future.

Before the game loads you will see the two main characters and then a window with the special symbols will be displayed. The reels are placed on a background that looks like a futuristic steampunk town, and you can read inscriptions like ‘Heaven Hotel’ and ‘Police’ in the background.

The buttons themselves are placed on what looks like a mechanism of an old device, again with a futuristic feel.

How To Play Temperance Slot

The grid on Temperance slots looks rather standard, there are five reels and three rows. The game features 20 paylines. Before you choose to spin the reels, you will need to decide how much you wish to wager per game. The stake is controlled via a single button, you click it and the wagering amount increases until you reach the highest amount and then if you click the button again it starts with the smallest amount again.

Considering that there are 20 paylines on Temperance slots, it is not surprising that the minimum amount that you can wager is 20p, or a penny per payline, even though you get to choose the stake for a spin, not per individual payline. The maximum stake for this game is £10, which is not too high.

In fact, we can say that Temperance is suitable for players who don’t want to make riskier wagers, as it allows them to go only as high as £10 per spin, which isn’t too high. You still need to be careful if you intend on wagering £10 per spin, as it is generally not advisable to wager more than 1% of your total bankroll per spin.

In addition to the spin button, there’s also an autoplay button located to the left of the play button. If you click on it, you can set the reels to spin from ten up to 100 times. Below this button is the settings button which you can use if you want to toggle the sound off and play the game in silence or listen to the music of your choice.

Then, there’s the wagering button which we mentioned above and finally, the Gamble button that becomes active after a winning spin.

How To Win Temperance

You will need to get at least three symbols across an active payline for a win in Temperance, but there are few symbols that award a win even if there are just two instances of said symbol.

Speaking of symbols, there are eight standard symbols in Temperance slot – four low-value symbols and four symbols of higher value. A winning combination is formed only if at least three instances of the same symbol are aligned from the leftmost towards the rightmost reel. If the symbols are arranged otherwise, i.e. right to left, you won’t get a win.

The winnings are calculated on the wager per payline. If you’re unsure what is your stake per payline, just divide the amount you’ve wagered by the number of paylines – 20.

The thematic steampunk symbols pay a lot more and even though it is a bit difficult to identify all thematic symbols and realise what each represents, you’d be happy to discover that the most valuable symbol pays 500 coins for a combination of five instances.

In addition to the standard symbols, there are two bonus symbols and a wild. The wild symbol is a substitute for all symbols bar the bonus ones.

We already mentioned the Gamble feature. It becomes available after every win and you get to pick a blue or a red relic and then a pinball game begins. If the ball lands on the right relic you get your winnings doubled. If you win, you can keep your winnings, or activate the feature once more, up to five times.

You will need a minimum of three free spins symbols to trigger this bonus. For three symbols you get eight spins, but for four and five you get a dozen and 20, respectively. The winnings during free spins are multiplied by two, three, five or ten, depending on where the pointer lands.

You will need three scatters on the first, third and fifth reel to activate this bonus. Once it is triggered you enter a chamber and get to choose one of the themed objects. All objects come with a different prize. The bonus game has five levels.

Temperance is an exciting and original game, with exciting bonus features and an RTP of 95.03%. The game can be played with as little as 20p, whereas the maximum wager is £10. If you want to play this game, claim your welcome bonus at some of the recommended sites and start playing!