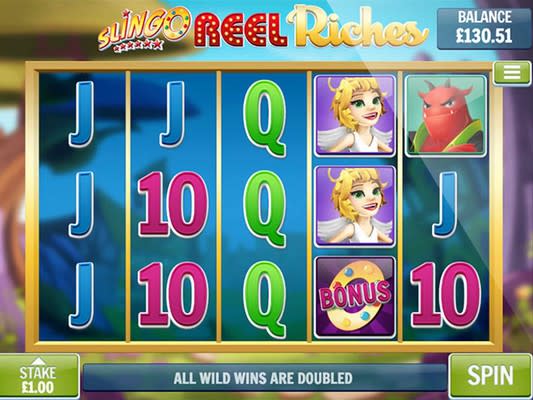 Games like Slingo Reel Riches look to change the passiveness of bingo and add the excitement of slots - all that by making the game more immersive and interactive. Unlike other typical Slingo games, this one comes as a fantastic slot game packed full of bonus features and wilds. You’ll even get the chance to choose your own bonus and double your line wins with the help of the Wild symbols.

The first thing you’ll notice when you start Slingo Reel Riches is the absence of a numbered grid. Instead, there are five reels like those you see on many online slots, as well as 20 paylines. However, the concept isn’t that different from games like Slingo Extreme, as you still have to choose your stake and spin the reels in the same way.

How To Play Slingo Reel Riches

You can adjust the game sounds from the expandable menu button at the top-right, as well as return to the lobby, or read the rules. The Spin button is located at the bottom-right, and clicking it will start the game.

How To Win Slingo Reel Riches

Like a slot game, Reel Riches has a paytable, which shows you how winning combinations can be made using eleven different symbols. The Wild is in the shape of a stack of pound coins and will substitute for all other symbols except the Bonus symbol. The Wild doubles any line win with an x2 multiplier, so if you land five wilds on a single payline, you can win 1000x your bet.

In Slingo Reel Riches you will also see a Joker, a Super Joker, a Fairy, a Devil, five playing card symbols (A, K, Q, J, and 10), and a Bonus symbol. The most valuable symbols are the Jokers, both of whom payout up to 1,600x your bet for five-of-a-kind.

Winning combinations can be formed with three or more matching symbols across an active payline, from the leftmost reel to the rightmost reel.

Once you've landed 3 BONUS symbols on the reels, you will trigger the bonus feature after which you’ll be presented with the following options for bonuses:

You’ll need to choose which bonus you'd like to run with. It's a tough job, but somebody has to do it! The bonus spins in this round are called ‘Win Spins' because every spin generates a win, which is definitely a plus.

Slingo was founded by Sal Falciglia SR in New Jersey in 1995. The original Slingo games mix the buzz of the bingo hall with traditional slot machines, providing players with a slot reel and a 5x5 grid. The goal is like in bingo - to complete the grid by matching the numbers.

However, this is where the slot-type features come into view – the numbers that need to be matched with those on the grid appear on the reels with each spin.  There’s a maximum number of spins allowed which is typically 20, but only the first 16 spins are free. The others have to be paid for either by using free spins or cashing in already scored points.

The game quickly grew in popularity, becoming a firm favourite of the online casino world. As the smash-hit brand went from strength to strength, different variations of the game emerged, with a vast range of themes.

Slingo Reel Riches looks great and plays great as well. It is probably one of the most unusual yet highly rewarding Slingo variants you can play. To be honest, the bingo elements are pretty much neglected and instead the game opts for more features that are traditionally associated with online slots.

This game comes with several advantages including bigger prizes, extra wild symbols, and bonus features. Plus, the RTP of Slingo Reel Riches is higher than your average Slingo game at 95.93% as opposed to 95%.

As mentioned before, Slingo Reel Riches minimizes the ‘bingo' element to accommodate the online slot lovers, but that's not to say that this game can't be enjoyed by regular Slingo fans, as you'll find all the familiar Slingo characters on these reels.

So, all-in-all, this is a highly interesting game that promises a lot of fun. Give it a try and make sure to choose the right bonus!