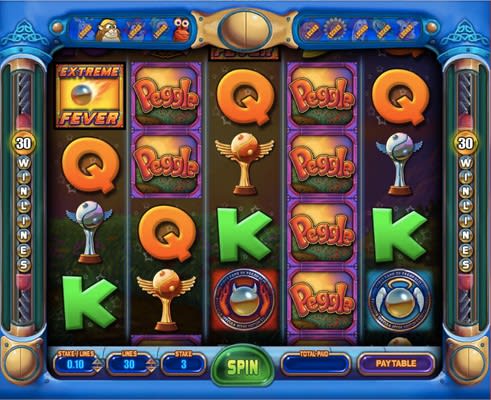 Based on Peggle video game

Casual games, especially casual puzzle games serve as inspiration for slots developers, in fact, some of the top online casino slots have been based on casual or arcade games. Peggle slots are based on PopCap’s Peggle game. The original Peggle was released on multiple platforms such as PlayStation 3, iOS, Windows and Windows mobile and more. The Peggle slot was developed and released in 2014 by Blueprint Gaming, seven years later than the original game, and is also available on all desktop and mobile devices.

Peggle’s mode of play and the overall outlook of the game make it suitable and adaptable for slot play, so it is a bit surprising that a slot variant of the game hasn’t been developed earlier. Either way, there are plenty of sites with Peggle slot, and some of the bingo sites featured on Bingo Scanner include this game in their library.

This game features five rows, four reels and 50 paylines with symbols very similar to those that appear in the original Peggle game.

The game is very colourful, bright and playful, much like the original game. The reels take up most of the space on the reels and they are almost transparent, i.e. you can see the background behind the symbols.

On the right of the reels, you will notice a bar that is getting filled every time you record a win and the buttons are placed below the reels. The reels spin in a very unique and stylish manner and that’s one of the visual features that distinguish Peggle slot from other games.

How To Play Peggle Slots

The game is quite simple and straightforward, all the buttons are displayed below the reels. These are the buttons and info bars that are at your disposal, from the leftmost position on the screen to the right:

These are all buttons that you need in Peggle. The game has 50 paylines, as we said above and even though you are free to decrease their number, that is not something that we would suggest. By decreasing the number of paylines, you decrease your chances of winning a prize, and even if a combination appears on a payline, you won’t be paid unless that payline is active.
So, it is a lot better to play with a lower wager per line instead of decreasing the number of lines.

How To Win Peggle

You will need at least three of the same card symbols across a payline for a win, and same goes for some of the more valuable symbols, but some symbols activate a winning combination with just two instances across an active payline.

As with other games, the symbols need to be aligned from the leftmost towards the rightmost reel. The winning amounts are calculated based on the current stake per line. So, for example, if you’re playing with a penny per line you will get 10p (10 coins) for a combination of three 9, 10, J or Q symbols, but with three Kings or Aces, you will win 20p. The top prize in the main game is 50 coins.

As you can see, prizes that you can win aren’t too high, but you can expect to win more often, this a game with lower variance. In addition to standard symbols, this game also features a bonus and a scatter.

The wild symbol can replace all symbols except the scatter. The scatter triggers the Free Games bonus feature or the free spins. This is one of the top features of Peggle slot machine and if you manage to trigger it you can expect some quite hefty prizes.

There are ten different options for the free spins game, but you have to unlock them in the main game first. These are some of the achievements that you can unlock:

The fact that the bonus features can be unlocked makes the game a lot more exciting and interactive, and while this is the only bonus feature in Peggle slots, the gameplay doesn’t feel dull and repetitive, as players are constantly trying to unlock as many achievements as possible.

The Peggle RTP is 95.15%, which is slightly higher than the average figure of 95%. Albeit only marginally better than the average, with this rate you can be certain that your chances of winnings are quite fair, in fact, it is what one can expect from an online slot game.