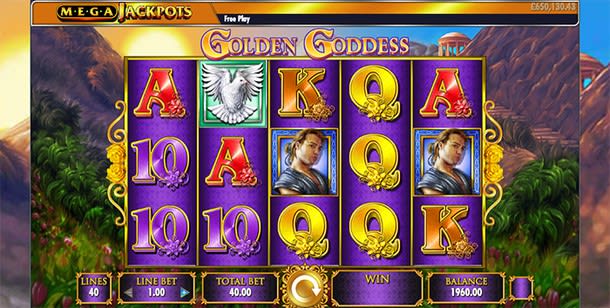 The Ancient world with its civilisations and mythologies has always been an inspiration for creative people in the film industry, in literature, but also in the slots development field.

MegaJackpots Golden Goddess slot is one of the games that borrow a theme from the Ancient world, more specifically from Ancient Greece. The golden goddess mentioned in the title of the game is actually Athena, the goddess of wisdom, who is also given a series of different roles within the Ancient Greek pantheon.

The atmosphere of this game is rather idyllic and the background against which the reels are set completely matches this theme. You will see a hill with the sun rising over it and a place from where you can overlook the whole scene. Most of the symbols are thematic and even the standard card symbols are designed in a way to match the general theme, even though there were no playing cards in Ancient Greece.

The sound effects give the impression that the action takes place in a simpler and more tranquil era when everything was calmer and more natural. Purple is the most used colour and you’ll notice that it dominates both on the reels, as well as on the buttons placed below the reels.

Otherwise, in terms of controls and general appearance, the game doesn’t differ too significantly from other IGT slots, so if you have played any game by IGT you will easily get how this game works. Keep reading our Golden Goddess slot review to find out more about the game and all its features.

This game features five reels and three rows, so it is pretty standard in that respect. There are 40 paylines on the reels of MegaJackpots Golden Goddess slots and all of them are active during every spin. You are free to adjust your wager though and it can go from one penny per payline up to a maximum of £50 and this, in turn, sets the maximum stake at £2,000. So, there are a lot of opportunities when it comes to wagering, but make sure that you bet at a sustainable level and that you don’t exceed your wagering limit.

The line bet is the control which allows you to set your stake. You can decrease the amount that you wager per line by clicking on the ‘-‘ icon, whereas the ‘+’ increases your wager. Next to this control, you will see a total bet filed where your overall wager is shown. In the bottom right corner, there’s a button that allows to toggle the sound off or on.

If you wish to set the reels to spin automatically, without your interference, you can use the autoplay button, and this button is available for players under the UK jurisdiction. If you activate this option you can also choose the number of spins that you wish to play. Also, you can set the conditions when do you want the reels to stop, for example after you’ve lost a certain amount of money, or after a notable win.

You are free to set your stake in accordance with your budget and your bankroll, but bear in mind that playing at a higher stake level increases your chances of hitting the progressive jackpot.

How To Win MegaJackpots Golden Goddess

You will need a combination of at least two or three same symbols across a payline in order to win. The number of instances depends on the particular symbol, and you will need at least three instances for most symbols unless you manage to get two instances of either of the most valuable three symbols.

The symbols have to be across an active payline, and they have to be aligned from the leftmost towards the rightmost reel, otherwise, a win wouldn’t be activated. One notable exception is the MegaJackpots Golden Goddess progressive.

The free spins bonus is activated by the rose, and you need to get this symbol stacked on the three central reels. That will trigger seven free spins and you can then choose a symbol which will be stacked during free spins. You can choose either Athena, Hephaestus, the horse or the dove, so, as you can see only the symbols of high value can be stacked.

The super stacks feature can be activated in the main game, during which all stacked symbols will turn into the same symbol and this can result in massive wins since you can get a single symbol stacked across a set of reels and this has the potential to trigger multiple winning combinations.

The progressive jackpot is won when you get 15 Mega Jackpots symbols anywhere on the reels. As we said, the chances of hitting this jackpot are increased with a higher wager, so if you’re aiming for the jackpot, make sure to increase your wager accordingly.

When we were looking for the best slots sites with MegaJackpot Golden Goddess, all we could find was some bingo sites that feature this game. However, it doesn't matter because all bingo sites on our list are well-rounded sites which provide various options for players of all kinds of online casino games. All of them offer such gaming options as slots, video slots, table games, live casino, and more. Each new customer at these bingo sites is greeted with an excellent welcome bonus consisting of various combinations of free spins, deposit bonuses, or free roulette chips to give them a more enjoyable stay and a chance of landing some win.

Established in 1988, Paddy Power site is almost always one of the top picks when it comes to bingo sites with MegaJackpots Golden Goddess online video slot. Their site is constantly growing to include numerous casinos consisting of every possible bet channel one can think of, with sites including great games like MegaJackpots Golden Goddess. Paddy Power’s design will most definitely keep you on their site and entertained, while the lavishing welcome bonuses are more than welcome, and with the in-game free spins other extras, it is more than certain that you will have chances of landing a win.

Formerly known as Top Rank, Mecca Bingo is UK-based company and operator of many bingo clubs all over the UK. It is owned by The Rank Group, which operates casinos, bingos, and online gaming industries in Spain, Belgium, and the UK. Mecca Bingo was given the award ‘Bingo Operator of the Year’ three years in a row - in 2014, 2015, and 2016.

With a selection including the latest, best, and most played online slots, that includes MegaJackpots Golden Goddess progressive jackpot, Gala Bingo is among our top choices. Offering excellent bonus features and a great number of free spins, it is the bingo site that definitely is worth the try. Play MegaJackpots Golden Goddess progressive jackpot on Gala Bingo and have a shot at its highest payout!

Playing MegaJackpots Golden Goddess demo is definitely the best way to get yourself acquainted with this game directly, but there’s also something else that you can do. Namely, if you read through our MegaJackpots Golden Goddess review, you will find out everything about this amazing game, its symbols, its layout and winning combinations, as well as the bonus features.

If you play the demo version you will get a more direct insight into the game, but it may take a bit longer. The good thing is that there’s no limit on the MegaJackpots Golden Goddess demo, you can play it as much as you want. You will be awarded virtual funds and you will be able to adjust your stakes and see how it works for you.

Later on, when you decide to play the game with real money, you will have a sense of what to expect and how much you should wager per spin. Still, don’t expect your demo session to be replicated when you play in real money mode, because that’s not how it works, every outcome is completely random. The standard random number generator that powers this game works in the demo version, as well as the real money variant of the game, so the gameplay will be no different, regardless which version of the game you’re playing.

In the MegaJackpots Golden Goddess demo, you will get to learn the symbols, the winning combinations, how to adjust the stake, and if you play long enough you will manage to activate most bonus features, if not all of them.

And you have every reason to play a bit longer than you would if you were playing with real money because you are not losing anything, even though you can’t win real money either. Some of the slots and bingo sites that offer MegaJackpots Golden Goddess offer free spins that can be used on the game. Check the bingo sites featured on Bingo Scanner and claim a great welcome bonus.

Many of the welcome bonus offers that you’ll find here including bonus funds that can be used on slots, as well as on bingo games, so it is a win-win situation.

When it comes to the RTP, MegaJackpots Golden Goddess slot offers 96.00%, which is more than acceptable, and more than the average RTP of online slots.

RTP means Return to Player, and it indicates the money that the game returns to the players counted in percentage. This number gets evened out with the money in a longer run, previously determined by the slot manufacturer. The long-run can be a period of time (a year or so) or a number of spins (10,000 up to 100,000), depending on the number of people spinning the reels of the game.

There are some common misconceptions about RTP, where some people think the number comes to play for their own session, meaning no matter what they do, they will never have a positive outcome at the end of the day, which is wrong.

MegaJackpots Golden Goddess slot may have a lower RTP percentage than the non-jackpot version of the game, but it still has a greater appeal thanks to the massive jackpot. Moreover, the RTP increases together with the jackpot, so if you play this game at a time when the jackpot pool is over £1 million the RTP will be compared to the RTP offered on games when the jackpot prize is lower. Speaking if jackpots and percentage, 3.5% of every wager goes towards the progressive jackpot pool.

Since this is a rather popular game, plenty of slots and bingo sites offer it, including quite a few bingo sites that are featured on Bingo Scanner, so if you aren’t already registered, pick a bingo site from our selection, open an account and once you claim your bonus you can start playing MegaJackpots Golden Goddess slot.