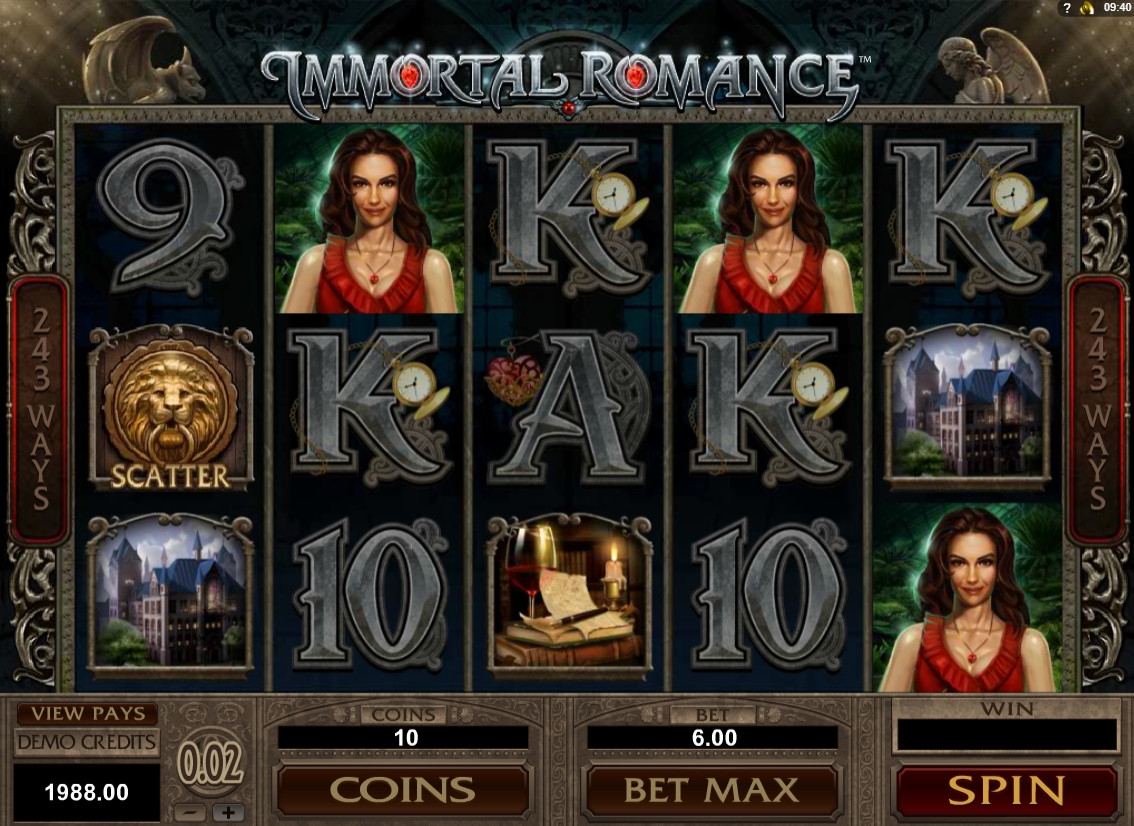 Many opportunities for getting free spins

Difficult to get to the higher levels of the bonus game

Immortal Romance slot is one of the online slot machines that stand out from the rest due to its unusual theme. This Microgaming release comes with a set of five reels in three rows, and a total of 243 ways to win. Developed as a vampire-themed slot, it comes with a fantastically dark and gothic atmosphere packed with a variety of bonus features.

When it comes to the bonus features, Immortal Romance has features like Wild Desire and The Chamber of Spins that can get you extra wild symbols on the reels, free spins, and multipliers. With the limits for the bet per spin set at £0.30 and £300.00, you can spin the reels to win Immortal Romance base game jackpot of 1500x your total stake. Immortal Romance slot advertises an RTP rate of above-average 96.86%.

Games with vampire theme aren’t that common in the slot scene and due to this Immortal Romance slots is a welcome addition. The five-reel, three rows reel set with 243 ways to win is placed against a backdrop of some dark gothic castle which adds to the mystery of the game. Similar to most online slot machines, the buttons of Immortal Romance slots are placed at the bottom of the screen making the operation of the game very easy.

When the game’s reel set is in question, Immortal Romance slots is decked with two groups of symbols. The group of low-value symbols comprises six standard playing card symbols, 10, J, Q, K, and A, with a certain gothic twist. All six symbols award certain payouts for combinations of three, four, and five matching symbols.

How to Play Immortal Romance

When it comes to playing Immortal Romance slots, you will find it very straightforward since all game buttons are placed at the bottom of the game screen. As with most online slots, before spinning the reels of Immortal Romance, you need to set your total stake for the spins. Since all 243 ways of winning are fixed, the two variables that you need to set are the coin size and the number of coins.

To set the coin size, you need to press the + and – buttons below reel number one. By doing so, you can select one of the four coin-sizes that include £0.01, £0.02, £0.05, and £0.10. The second variable that you need to set is the coins per line variable. By pressing repeatedly on the “Coins” button, you can set anywhere between one and ten coins per line.

Once you have finished setting your total bet for the spins, you can spin the reels of Immortal Romance slots by pressing the red ‘Spin’ button in the bottom right corner of the screen.

If you want to play the maximum number of coins per line for the selected coin size, then you should press the “Bet Max” button. Once you press it, the reels will start spinning, so make sure to select your coin size beforehand.

If you want to enjoy the gameplay of Immortal Romance slot without pressing Spin repeatedly after each spin, then you should go for the Autoplay feature. You can find this option when you click the “Autoplay” button under the reels.

How to Win Immortal Romance

This is a randomly triggered bonus extra which will turn up to five reels into wilds, increasing your chances for landing a win.

The Chamber of Spins

The main bonus game in Immortal Romance is triggered by landing at least three of the lion’s head scatters to enter The Chamber. The first time you manage to trigger the bonus you can pick only Amber, but as you trigger, 5, 10, and 5, you will be able to select Troy, Michael, and Sarah receiving the following:

Even though it says demo, Immortal Romance slot's free version has all of the features and gameplay characteristics as the full version, the one you would find in online casinos after starting your account. The Immortal Romance Demo includes the bonus features too, which are the Wild Desire feature and the Chamber of Spins, both of which generate a spectacular number of free spins and bonuses.

The demo version of this game can be played online, or at some of our affiliate casinos. One notable difference is that if you make the big win, you would be left without a cash romance. Only online casinos can pay the full winnings that are won in the full game. This is why the advice is not to engage in a pointless romance - do the real thing and play for the win.

Paddy Power is definitely a name that you’ve already come across if you are a part of the online gambling community, and you know that they are one of the pioneers and one of the first large names in the industry. With a lot of land-based casinos before stepping in the online world, this Irish brand already had the experience and what it takes to conquer the online market.

Their site is truly amazing and offers one of the best customer supports, as well as a plethora of games including Immortal Romance.

Definitely a site you have to visit if you are playing online slot games. Betfair Bingo offers the best customer and user experiences, as well as a ton of games, including slots, table games and scratch cards at your disposal.

Immortal Romance is definitely a high-quality online video slot with fantastic graphics and animations. The game comes with a couple of bonus features that can get you excellent rewards.