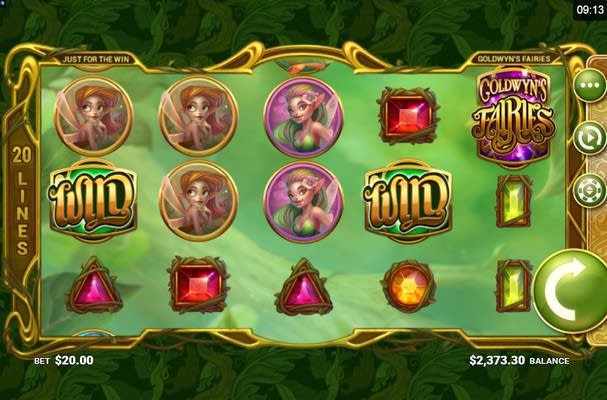 Goldwyn’s Fairies slots have all the traits of high-quality Microgaming slots. If you know anything about the online slots industry, anything at all, you are surely familiar with Microgaming and their contribution. Many say that this Isle of Man-based company essentially revolutionised slots and that’s not far from the truth, considering how many great slots they’ve produced so far.

These are some of the leading Microgaming titles:

The range of themes is quite diverse, we can say that Microgaming’s developers can find inspiration in a wide variety of topics.

Goldwyn’s Fairies slot was developed in collaboration with Just for the Win and it is one of the few Microgaming slots with a fantasy theme.

This game is so green, and according to scientific reports, this colour is linked to good taste. The reels are a lighter shade of green, placed on a background that’s a darker nuance. The game title – Goldwyn’s Fairies is subtly written on a small placard on the right of the reels, whereas the name Just for the Win is displayed on the left, above the first reel.

The control panel and the overall appearance of Goldwyn’s Fairies slot remind to other Microgaming slots, but since this game was developed together with Just for the Win, the game has its unique features and distinctive design. Since the theme is fantasy the music also reflects that, it is quite a clam and peaceful slot. There are five reels, three rows and 20 paylines, so the overall layout is quite standard and usual.

How To Play Goldwyn’s Fairies

The control panel is quite simple and straightforward. If you wish to play Goldwyn’s Fairies slots you just need to press the play button which is placed in the bottom right corner, it overlaps just slightly with the bottom symbol on the rightmost reel.

Above there’s a smaller button which you need to click on in order to alter the stake. The stake isn’t determined per payline, instead, you need to select the overall amount that you wish to wager per game. It starts with 10p, but you can raise it up to a maximum of £250. So, in terms of stake and wagering this game offers a lot of flexibility and it is suitable both for high-rollers, as well as players who wager a lot less. These are some of the stake amounts that you can choose from:

Above the stake button, there’s a settings button and it opens an additional panel where you can toggle the sound effects off and enable the quick spin option. Below the reels, you can see your bet for the upcoming spin and the current balance.

How To Win Goldwyn’s Fairies Slot

This game features four gems which are symbols of lower value, four fairies which are worth more than the gems and three different wild symbols, some of which also act as scatters.

The gems aren’t too valuable, you will get an amount worth 0.2 times of your overall wager for three same gem symbols across a combination. If you get four gems on a payline then you will win either 1.5 or two times your wager. Moreover, with five gems you will get either four or five times your stake, depending on which gem symbol is on the payline.

The fairies pay a lot more than the gems, and if you get three instances of the most valuable fairy across a single payline, you will win 50% more than what you’ve wagered, whereas for four fairies on a payline you can win from 2.5 times up to four times your stake. The highest payout from standard symbols in the main game is 12.5 times your wager, and bear in mind that if you wager £250 the winning amount would be £3,125.

However, if a winning combination consists only of wilds and you get five wilds across a payline, you will get a prize worth 25 times your wager. The jackpot in the case when you have wagered the maximum amount (£250) is £6,250.

This game features three different wild symbols, in addition to the classic wild symbol, you will also see a re-spin wild and a free spin wild. All three wild symbols substitute other symbols and they can generate payouts. However, the re-spin and the free spin wilds trigger bonus features.

Goldwyn’s Fairies slot also features a free spins bonus and it can be triggered by the special free spins scatter. The scatter needs to appear simultaneously on the first, the third and the fifth reel. When this happens, you will be awarded ten free spins, and during the first nine free games, the returning wild bonus feature will be active.

How To Play Goldwyn’s Fairies Demo

The demo has both its pros and cons. However, the pros outweigh the cons and include the opportunity to experience the gameplay and see how often the bonus features get triggered before moving on to the real game version. This way you can see whether you like the gameplay and how you can win the biggest payouts. You can also read about symbol combinations and paylines by opening the game’s paytable. You can also find additional info that can help you understand the rules of the game better.

As already stated in the text above, playing Goldwyn’s Fairies demo has its own advantages. Aside from some minor advantages, one of the biggest advantages of playing the demo is that you can experience the gameplay of the real game without risking your own money on the spins.

Playing the demo of any online video slot is always a smart choice because you can familiarize yourself with the game. By playing the demo you can try the game’s different options, including the game’s scatter and bonus symbols, and see how the game’s bonus features get triggered. Once you are familiar enough with the slot and gain sufficient experience, you should move on to the real version of Goldwyn’s Fairies slot.

Goldwyn’s Fairies is a fun game, although there are plenty of fairies-themed games, we feel that this one will find its place, as it features solid gameplay options, enchanting symbols and amusing bonus features, including a free spins bonus.