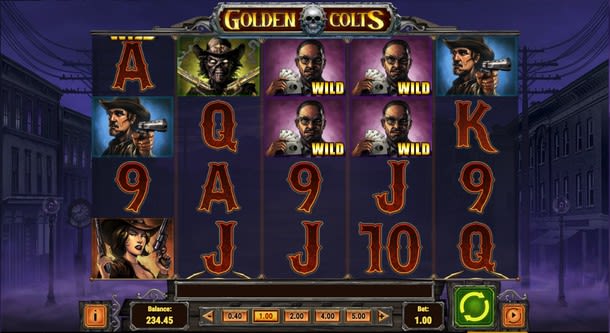 Golden Colts slot isn’t one of the first online slots with a western theme, but it may well become one of the most popular and most played such games. The game was developed by Play N Go and it was released towards the end of February 2018, and the following few months were quite good for Golden Colts slots, as players got familiar with the game, more particularly with its amazing seven bonus features.

The game has a five by four layout with a total of 40 paylines and a unique visual appeal, with quirky animations and somewhat spooky characters, including a skull with glowing eyes. The name Golden Colts really says it all, you will see a lot of colts in the characters’ hands, albeit not golden ones.

The general feel of Golden Colts slot is a bit gloomy and grim, but there’s nothing to be scared off here, this slot is simply using a popular theme and it might remind you of a number of comic books with a similar theme, especially if you are a fan of such comics.

The music reflects the overall atmosphere and you will notice that there’s a lot of rain, as the action is set during a thunderstorm. The game has a user-friendly control panel which also reflects the general theme. Golden Colts slots are available on mobile devices, as well as on desktop computers. You can play this game with a minimum of 20p per spin.

The reels are set on a background that will look all too familiar to anyone who has ever watched a western movie. Here, you will see a typical high street in a town in the wild wild west, with one notable twist – the town in Golden Colts slot looks like it is haunted.

How To Play Golden Colts

All buttons are placed below the reels. Even though there are forty paylines, you will still be able to play the game with just 20p. You won’t have to adjust the stake by payline, the bet is set overall. It starts at 20p, but you can also wager 40p, £1, and up to £100. Naturally, as with other games, you will need to wager more if you wish to win higher prizes.

Next to the little screen that shows the amount you’re wagering on that particular spin, there’s a play button and to the right, there’s an autoplay button. You can set the reels to spin from 20 up to 500 times, but there are plenty of options regarding when the reels should stop. You can select to have the autoplay option stopping after a win, or after you lose a particular amount of money. In the bottom left corner, there’s a sound button, so if you like to disable the sound effects and play the game in peace, you just need to press it.

How To Win Golden Colts Slot

You will need to get three symbols across a payline for a win in Golden Colts slot, regardless whether the symbol in question is a standard card symbol or a symbol of higher value. The symbols have to be arranged from the leftmost towards the rightmost reel unless the symbol in question is the scatter which pays regardless of the position on the reels.

There are six card symbols in Golden Colts slot, from the 9 up to the Ace. If you wager with £1 you will win 10p for a combination of three 9s and 10s, the J and the Q pay 15p for a combination of three symbols, whereas the A and K pay 20p. Five symbols pay a lot more than three or four symbols. For five Aces you will receive £2.25 with a £1 wager.

The main characters pay slightly more than the cards, you can win up to a maximum of £6.25 with a wager of £1, but if you play with £10, the prize will be £62.50. The wild symbol can substitute all symbols except the scatter. If you get a winning combination consisted only of wild symbols, you will win 12.5 times more than your overall wager.

The scatter symbol is perhaps the most important symbol in Golden Colts slot, as it triggers the main bonus game. The bonus game itself offers seven different options. Basically, once you get three scatters anywhere on the reels, you get the special cylinder which spins and picks one the bonus features for you.

How To Play Golden Colts Demo

The Golden Colts demo version has both its pros and cons. However, the pros outweigh the cons and include the opportunity to try the gameplay before deciding to play the real game version and see how often the bonus features get triggered. This way you can see whether you like the gameplay and how you can win the biggest payouts. You can also find out information on symbol combinations payouts as well as paylines by opening the game’s paytable. Additional info that can help you understand the rules of the game better can also be found here.

As already stated in the text above, playing Golden Colts demo has its own advantages. Aside from some minor advantages, probably the biggest advantage of playing the demo is that you can experience the gameplay of the real game without risking your own money on the spins.

If you are looking for the best slots sites with Golden Colts, you're at the right place. Check these two slots sites where you can play the Golden Colts slot and see if some of them suits your needs.

At Leo Vegas, players can enjoy some of the most well-known and popular slots around, including some of the best-known releases from some of the best software providers in the industry. Of course, you can play the Golden Colts at Leo Vegas casino as well, and can claim some excellent bonuses and promotions.

Not all slots site offer 1000 or more games, including live casino and virtual casino games. Playzee is such site where you'll find the Golden Colts slot and can grab some catchy promotions. Playzee has been present in the online world for years and knows how to acquire the best and most sought-after casino games and slots in the world.

In order to make the most out of this game, we are sharing with you a couple of Golden Colts tips.

One of the main Golden Colts tips that you can use in order to increase your chances of winning is to try and wager as many active paylines as possible. In fact, it's best if you play on all paylines that are available at Golden Colts. The more paylines that are active, the more chances there are of landing winning combinations in various ways and ultimately receiving some nice payouts.

Other Golden Colts tips include choosing a coin size which is comfortable for you or simply choosing the lowest coin size available, as well as setting a winning and losing limit. Don't forget that none of these Golden Colts tips is considered as a cheat but all of them are just examples of how you can get the most out of this game.

Golden Colts is a fun and very exciting game, set in the eventful wild west, where everybody is fast on the trigger. When you manage to activate the bonus game you are in for some real treats, regardless of which bonus feature is picked.