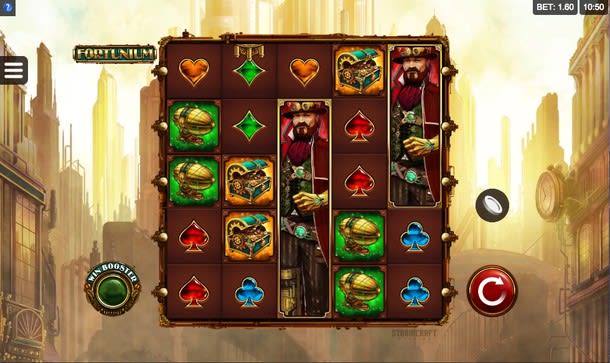 Fortunium is an online slot and a world of itself, with five-reel five-row reel set that spins to win a potential £100,000 jackpot. The game's 40 paylines work to accommodate symbols that hail from a steampunk future that has a giant metropolis as the backdrop. The protagonists in Fortunium slot are not unlikely dressed in retro, industrial-era high fashion clothing but with a futuristic spin.

Yes, indeed, this is the conceptual contradiction of steampunk that plays really well because it creates gameplay that is detached from anything that is concrete. That is why the Fortunium slot is exciting to play, and that is not just because of the truly hefty payout of 100,000 coins multiplied by the winning wager, which can be gotten on the maximum amount.

The two main symbols of the game are for Victoria who is set to explore this megacity and Maximilian who is busy inventing machines in the futuristic novel-like Fortunium slot.

The game's symbols suggest gameplay that revolves around the action that they generate, through a number of the game's symbols, which creates the story besides creating the winning payouts. The protagonists are in control of some interesting weapons, plated in gold and made of precious gems. They also have accessories that make them more powerful, like the golden gauntlets and the top-hat scoping devices and the gold mechanical falcon which does, who knows what!

The game's big reel set invites fun gameplay that has to be filled with exciting symbols and paylines. The Fortunium slot has mystery symbols, bonus symbols and bonus games. All of these will be given their due attention below. First, let's take a look at the symbols that bring on the winnings.

The low-valued symbols are the cards suits club, diamond, heart and spade. These come designed in luscious and radiant blue, emerald, orange and red colours. The most valuable of these symbols is the red spade which brings 250 coins times the winning wager for five like symbols. That is half of the next more valuable symbols in the high-value category, which is the bizarre gun with a double-decker barrel - delivering a wallop of 500 coins.

The rest of the high-value symbols are a golden dirigible, a mechanical treasure chest which we have the slightest idea what it does but looks really nice, then there are the game's protagonists, Maximilian and Victoria, whose names obviously stand for Maximum Victory - and that is a rub of luck on each spin that the player takes on an online slot suitably named Fortunium slot.

How to Play Fortunium Slot

In setting up for the gameplay, the only thing that needs to be configured is the amount that is going to be wagered per each spin. In that regard Fortunium is a pretty flexible online slot, allowing coin sizes with a wide range of wagers, starting at £0.15 and going all the way up to £185.

The game's Wild symbol substitutes for all other symbols, except for the scatter which is a glass sphere filled with a green noble gas. This symbol brings the free spins bonus game that is part of the Fortunium slot.

The mystery symbols could be considered as one of the Fortunium bonus features because they reveal a random symbol, including the Wild but excluding the Scatter. The mystery symbol which comes as a question mark on the reel set enables the player to select the Win Booster option which will increase the cost of the bet by 50% of what it is.

In this event, any of the low valued symbols that have been blessed by the mystery symbol will activate also the high-value symbols and the wild symbol. In this combination of events, the player stands a bigger chance for scoring a bigger winning combination.

How to Win Fortunium Slot

Winning in the game is a matter of pure luck as there is no way to knowledgeably affecting the random number generator - because, it is random. That being said, the way to win is to feel lucky and optimistic that you are going to land some top-paying symbols as part of a winning combination. The randomness of it all is not so bad either.

Some players will turn out lucky in the Fortunium slots because of the bonus features or because of the Wild card which in a certain occurrence of probability will turn up when there are four matching symbols - in order to make them five.

If the player is lucky enough to score more than three scatters will active the mystery reels - one scatter symbol for one mystery reel. This game invites a field of only premium and wild symbols. During the free spins, there are the expanding top paying symbols which can cover an entire reel and bring on bigger winnings.

The game delivers a top payout of 100,000 coins on the top wager, and this occurrence is available during the free spins where you would be lucky to land an entire reel set of the top paying symbol. While this is not completely impossible, there are few other ways to land sizeable winning combinations such as landing many of the top paying symbols plus many instances of the Wild symbol.

We have here a medium to low variance online slot game that has few good winning combinations that can deliver ok winnings, besides the jackpot which is further away from hand’s reach just like any other jackpot.

If you are feeling lucky and in the mood for some steampunk reel action than Fortunium would be your best pick for the period, as it may prepare a premium surprise. Claim your free spins at Bingo Scanner by claiming one of the welcome packages from this page.