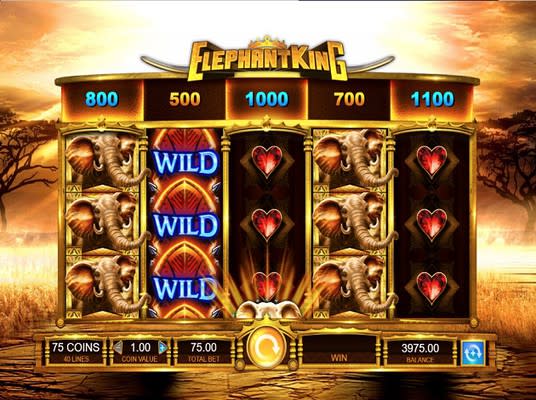 Play the Elephant King slot and go on a safari to capture some hot cash prizes. The game has 40 paylines, five reels and three rows, as well as a free spins bonus feature that can go on and on.

If you are ready to take a walk through the savannah and hunt for some cash prizes then play the Elephant King slot. This five-reel game has three rows and 40 paylines that spin for a thrilling action that will cost more than the typical slot machine. With that in mind, the winnings are also better than your average online slot, so it is a trade-off which needs to be weighed before playing the game, or, while playing it. In addition, Elephant King has an RTP of 96.02% which lists the game among slots with average RTP rates.

The Elephant King slot has been made by the slots experts at IGT and is not only found at online casinos. This title is part of the land-based casino experience in the world's most famous casinos, which is telling of the effort and attention to detail that has been invested in it. The Elephant King slot has a major distinguishing feature. Above each line is a window that displays the amounts of the various payouts as you are increasing or decreasing your bet.

Another thing is that even with the smallest betting amount this slot is seriously expensive, and so much so that it can reach a total bet of 15,000 credits per spin! Yes, that is unbelievable and the maximum payout is 25,000,000 although, the game's paytable information states that the maximum winnings during the Free Spins are capped at 99,000,000. There need to be some heavy theoretics applied to determine if such an amount could ever occur, but that is what the game's developer says.

A note to consider is that the Elephant King slot could have had different, more sensible, values given for your jurisdiction or for online gaming. So it is important to check out how far the bet could go before pulling the lever.

The game's design trumps even the elephant's gigantic stature. The guys and gals at IGT have made a gilded reel-set that works in the front of a beautiful backdrop of a sun-washed savannah. The reel-set is topped by the Elephant King slots logo. Below the reel set are five windows that display the various amounts which are relevant to the game. The 75 first window is for the paylines (always 40 are active), next over is the coin value, then the total bet, further next is the latest win amount and finally, the window that displays the balance.

There are low and high-paying symbols in the game. The low paying symbols are gems - one round and four shaped like the cards' suits - an emerald spade, a sapphire diamond, an orange clubs and ruby hearts. The high paying symbols are a number of savannah animals - antelope, zebra, rhinoceros and the elephant.

The African tribal shield is the Wild symbol and substitutes for all symbols except the elephant medallion which is the scatter which also awards the Elephant King slot Prize Disk feature.

How to Play Elephant King Slots

The game is straightforward to play and few clicks will have it ready for you to play. The paylines are constant and can't be changed in number, but the coin value does set the total bet amount. Click this button to figure out your bet. Like we said, depending on the jurisdiction or at what online casino you are playing, the game will have different wagering options in terms of amount, so pretty sure, you could play this game for as little as 75p per spin.

Otherwise, the usual controls are in play here. The Play button is a round arrow which is centrally placed, below the middle reel. The auto spin button is in the right bottom corner and allows you to play up to automatic spins. The paytable brings up the amount of the cash prizes, the paylines and some information about the Elephant King slot bonus features.

How to Win Elephant King Slot

To win the game, you need to land some amazing winning combinations or initiate free spins adventure that will last you for quite some time, thanks to it being able to re-trigger free rounds. Let's take a look at that bonus feature as a way of winning significant prizes in respect to the size of the winning wager.

To get the free spins round, you need to land three of the golden Elephant King slot medallions, which are the scatter symbol. This will initiate the free spins, which work in combination with the Wild symbol. There are two additional symbols that appear during the Prize Disk bonus feature, which is the free spins game.

Overall, the free games are one certain way to increase the probability of winning a nice amount because the multipliers that are displayed on the Prize Disk are between 500x to 10,000 times the wager.

These slots are becoming more popular with time and by now there are enough titles to call this a genre of its own. This makes sense considering how many games are out there that follow an "Irish luck" theme or "Chinese" themed slots that are dominated by red colours and cultural symbols.

The Africa-themed slots, like the Elephant King slot, are becoming available online in greater numbers. You will find a recurring theme - the animals of the savannah such as rhinos, zebras and lions as well as the landscapes and some symbols such as spears and shields.

Titles of the similar genre that we should mention are Silver Lion and Silver Lioness, Stampede and Raging Rhino.

Elephant King has a cool vibe to it. The symbols depict gracious animals which thankfully are not killed for the prizes. The game plays like a champ and can be found in a number of online casinos.

Claim your welcome package to play the Elephant King on bonus play money and free spins.