Deal Or No Deal The Banker's Riches Review 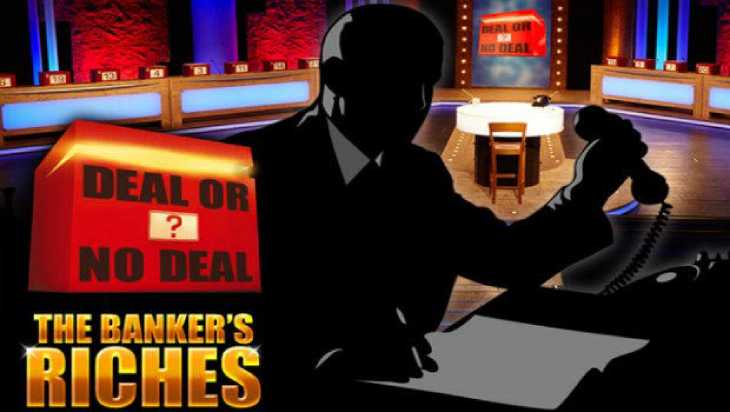 Deal Or No Deal The Banker's Riches Review Slot Game

Anyone familiar with the Neal Edmonds game show in the UK will not need any introduction to this online game. Deal or No Deal The Banker’s Riches is a five-reel, 25-payline game with several bonus features, but also comes with a progressive jackpot to add to the fun. The bonus features include such games as the Jackpot Bonus Game, Reel Banker and The Banker’s Best Offer, each offering different prize. Deal or No Deal online game advertises an RTP (Return to Player) rate of 95.06%.

Our Deal or No Deal Overview

Deal or No Deal slots from Endemol brings the excitement of the popular daytime television show to online slots. It is designed as a five-reel, 25-payline slot game featuring excellent bonus games and even a progressive jackpot.

When the symbols on the reels are in questions, they can be divided into two groups. The low-value symbols include standard playing card symbols including J, Q, K and A. The high-value symbols are five on-theme symbols representing various elements from the show. The show mug, bank ledgers, the show’s circular centre point, the banker’s seal and the silhouette of the banker can get you the higher prizes.

The red and yellow boxes pay the highest of all the normal symbols. The Deal or No Deal slot logo is the game’s wild, while the famous black telephone acts as the scatter.

How To Play Deal or No Deal The Banker’s Riches

Deal or No Deal The Banker’s Riches slot is a very straightforward and easy to play game since all buttons are placed at the bottom of screen.

Before spinning the reel set of Deal or No Deal slot, you need to set your total stake for the spin. This is done by adjusting the two available variables, the ‘Bet Per Line’ variable and the ‘Lines’ variable.

Bet per line amounts can range between 0.01 and 100 and can be selected by clicking on arrows on the sides of the ‘Bet per Line’ box. The second variable that you need to set before pressing the games spin button is the lines variable. By pressing the arrows on the sides of the ‘LINES’ box, you can select anywhere between one and 25 active paylines to play your bet across. If you want to play with the maximum bet available, press the ‘MAX BET’ button.

Once you have selected your stake for the spins, you can spin the reels of Deal or No Deal slot by pressing the red ‘Spin’ button in the bottom right corner of the screen.

If you are not too keen on pressing ‘Spin’ after each spin, you can always go for the autoplay feature the game offers. By pressing the arrows of the green “SPINS” button in the bottom right corner of the screen, you can select a certain number of rounds to be played automatically. Once you make your selection, press the ‘START’ button and the reels start spinning. You can stop the AUTOPLAY mode at any given time by pressing the “Stop” button.

How to win Deal or No Deal Slots

Deal or No Deal Bonus Features

The famous black telephone is the game’s scatter and the key to the bonus features. If you manage to land at least three of these symbols on the reels, you get a chance to win one out of the three games as follows:

It is here where you can win the game’s progressive jackpot, but you’ll need to play with the maximum paylines. First, you’ll have to play a version of the TV game show by selecting one of the 26 boxes displayed on your screen. Six more boxes will be opened, and the banker will make an offer which you can refuse or accept.

Accept his offer and the game is over but refuse it and you can continue playing until your first selection is left which will be your prize for the game. The progressive jackpot can be offered at any point in the game. There are three jackpot amounts which can be seen above the reels.

If you manage to trigger this option, the reels will start spinning winning prizes for you until the banker symbol is landed on reel three. All wins during this round get a 2x multiplier.

In this bonus game, the Banker will offer you up to ten different prizes. You can refuse or accept each line, but you’ll have to accept the final offer.

Our Deal or No Deal Slot Review

The Neil Edmonds game show may be rubbish, but Deal or No Deal online gameis good fun. The three different bonus features and the progressive jackpot should be more than enough to keep you busy for some time. The game comes with an RTP rate of solid 95.06%.

Try Deal or No Deal The Banker’s Riches today and don’t forget to claim your welcome offer from one of the bingo sites promoted on BingoScanner!