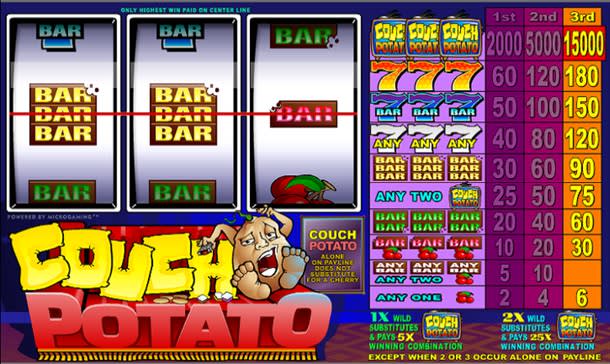 You are surely familiar with the phrase couch potato, even though you don’t have to be one to enjoy this game. Couch Potato slot is a cheeky online slot, designed as a game within a game. It is a Microgaming slot, so that says a lot, considering how widely popular many of Microgaming’s previous games are.

So, don’t be lazy, read this review down to the bottom, and if it looks exciting and you would like to give this game a go, then check some of the slots and bingo sites featured here that offer it. Slot developers have developed a number of modern-looking slots over the years, and there are plenty of classic retro slots as well, but there aren’t many games that are both retro and modern.

Couch Potato is exactly one of those games that look fresh and classic at the same time. Fans of Microgaming slots will definitely find this game amusing as it is so much different from some of their other titles, but even if you don’t particularly fancy Microgaming slots, you might find this one enjoyable, as it is quite original and unique.

As we already mentioned, this game looks like a retro slot, so you’ll feel like you’re actually sat at a Las Vegas casino, without actually having to leave your living room. Of course, you can also play Couch Potato slots on your mobile device, again regardless of your actual current location.

You will see the game logo and the Couch Potato title below the reels. There are just three reels and just one payline, much like on the old classic slots. To the right of the reels, you will see the full paytable, there’s no need to click buttons or check tables to see how much you could win from a particular combination, everything’s right there in front of you.

The sound effects are quite exciting and match the game and its theme, you will hear coins dropping after a winning combination is formed, much like you would if you were making wagers on a conventional online slot.

How To Play Couch Potato

Even though this is a simple and straightforward retro game, it offers quite a lot options when it comes to wagering. The game is set in regular mode by default, but you can click on the red button that says ‘expert’ the control panel will change, and new options will appear.

The ‘spin’ or the play button is located in the bottom right corner. Next to it is the max bet button that you could use if you wish to wager the maximum possible amount. There are three bet levels, by clicking on ‘Bet One’ you will see your wager increasing.

There’s also an autoplay button and if you click on it, you will be able to set the number of spins, but also set some additional options and criteria, regarding the autoplay mode and when it should stop. If you want to activate the auto spin quickly, with a single click without setting additional options, you just need to click on 5x or 10x and set the reels to spin five or ten times.

In the top right corner, you will notice a very small button that you can use if you want to toggle the sound effects off and play the game in silence or listen to music of your choice.

How To Win Couch Potato

When it comes to winning combinations in Couch Potato, things are pretty simple, there’s just a single payline, so three instances of the same symbol need to be aligned across that line, although in some cases you get a payout for just one or two symbols. Considering that the outline isn’t a standard one where symbols appear always in fixed positions, the symbols need to be placed in the exact positions across the designated line, not below or above it.

As for symbols, you will see cherries, bars and 7s, as well as the bonus/wild couch potato symbol. Interestingly, even though the cherry is the least valuable symbol altogether, compared to other available symbols, it is also the only symbol that generates a payout with just one instance across the payline. Still, you won’t win too much if you get a single cherry or even two cherries.

There is no standard bonus feature in Couch Potato. There are no free spins or anything else, it is just the Couch Potato logo symbol that is somewhat special. Namely, if you get this wild to act as a substitute and complete a winning combination the payout for that particular combination will be multiplied by five.

After all, this is a pretty straightforward classic slot game, so you shouldn’t really expect complex bonus features and all that.

If you are a fan of old-fashioned, classic slot games and you like seeing bars, cherries and 7s on the reels, then Couch Potato slot definitely is the right game for you.

If you want to play Couch Potato and try to win real cash prizes today, register with one of the casinos featured on Bingo Scanner and claim your bonus!