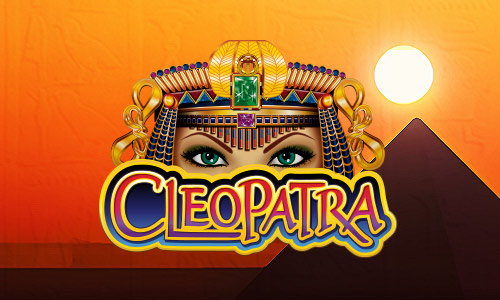 We wish RTP were a percentage point higher

Cleopatra Slot is a five-reel online slot that has twenty paylines and a jackpot prize of 10,000 coins. This is one of the most famous Ancient Egypt-themed slots in the world and we are happy to connect you with special promotions before playing for the win.

Cleopatra is the most recognizable online slot from the score of Ancient Egypt-themed slots which are ubiquitous both in land-based and online casino. Something makes the Cleopatra slot to stand out, however, and because of that this game is featured prominently in nearly all big online casinos. What is so unusual about Cleopatra is hard to tell. Indeed, the symbols have been designed with attention to detail and have beautiful colors and ornaments, but that is true for many online slots out there. Another culprit to the game's popularity may be the free spins feature, but many games offer similar bonuses. In the end, it may be a stroke of luck of the developers IGT. This is a company that doesn't go wrong with the slots they make, but they have really hit some magic notes on the Cleopatra slot. We surely hope that this stroke of luck rubs off on the players, who are in the game for a jackpot prize of 10,000 coins times the total amount of your winning bet.

The design plays a huge role in the appeal of Cleopatra slot. First of all, the reel-set is unusually spacious and this is true for the symbols in it. This creates the effect of being in it - inside the royal palace where Cleopatra used to reside in all her privilege and splendour. The symbols reflect just that. Every one of the lower valued symbols is gold-plated and diamond-encrusted, with added decor such as bows and golden strings that are spun in marvellous figures. The lower-valued symbols are the card numbers and letters nine, ten, jack, queen, king and ace.

The rest of the symbols are those that pay the big coin, or at least more than the symbols we talked of above. The high-valued symbols include an inventory of Ancient Egypt objects and religious symbols, which are all either gold-plated (that is, done in deep yellow colours) or have a shiny or fluorescent tinge to them. This category of symbols includes the eye of Horus, the pharaoh's crook and flail, a hieroglyphic plate, a rendition of three blue lotus flowers, a golden-legged scarab and the Cleopatra logo, which is also the Wild symbol and five of which pay the prize of 10,000x coins times the player's total bet, while four pay 2000 coins.

How to Play Cleopatra Slot

To play the Cleopatra slot you need to select any of Bingo Scanner's affiliate casinos which are on this page. This will take you to the welcome package which includes free money to play with, as well as free spins. Once you are at the Cleopatra slots before you spin the reel you need to take a look at the initial bet. Unless you want to spin the default bet arrangement, then simply click on the green right-pointing arrow on the left side of the reel-set, and set the wager settings which will appear in the box. This is where you can select the coin size per payline and the level of the bet.

The twenty paylines are fixed, which means they can't be activated or deactivated. But you can arrange the amount you are betting. The smallest coin size is one penny and the biggest is £20.00 per payline, per spin. Raising the bet level will multiply this number and you can indeed go to incredible amounts with your bet, but you can also play reasonably with smaller or medium amounts of money. It was mentioned that the Cleopatra slots has five reels, three rows and twenty paylines, and in that regard, it is a pretty standard online slot machine.

How to Win Cleopatra Slot

The game's main prize is won when the player gets five Wild symbols in a payline. This is a slim probability because the Wild can not substitute for itself, however, the Free Spins feature may provoke an outcome of that magnitude. The Cleopatra free spins are brought on when three or more of the Pharaoh Scatter symbols land anywhere on the reel-set. This brings 15 free spins and a triple multiplier on all winnings, except the five Wild Cleopatra slot logo. There are additional bonus surprises in the Cleopatra, and all have to do with increasing the player's winnings. Landing three of the Pharaoh Scattered symbols pays five times the total bet; landing four pays 20 and landing five pays 100 times the bet.

Something similar is true with the Wild symbol. If one or more Wild symbols are part of a winning combination, the amount that has been won will be doubled.

The Cleopatra slot draws inspiration from the historical figure that ruled Egypt as a descendant of the Ptolemaic dynasty of the Ancient Macedonian empire. Cleopatra is tied to court intrigues, courtships with powerful men, including Caesar and Mark Anthony. Cleopatra's rule was marked by splendour, as well as clever politics. She knew how to disburse with her money to secure her rule for 21 years. Therefore, it is quite fitting that one of the most popular slots (released in 2006) is dedicated to Cleopatra, the last ruler of Egypt.

The Meaning RTP And Its Importance

Before we get into the Cleopatra RTP, we wanted to talk a bit more about the concept of RTP, one of the most essential concepts regarding slots. RTP is an abbreviation that stands for return to player, and it tells us the amount that the game returns to the players, as winnings. So basically, if we take all the funds that have been wagered on a game, the RTP tells us the amount that is returned back to the players.
The RTP percentage is set by the game developer, so all slots and bingo sites where the game is available offer the same variant of the game, with an identical RTP percentage. The operators cannot alter the RTP, although the RTP may vary.
For instance, the RTP for Megajackpots Cleopatra, an updated version of the game that features a progressive jackpot, is variable, when the progressive amount is lower the RTP is also lower, but as the jackpot amount grows, so does the RTP. Other games feature variable RTP rates where the percent may depend on some in-game choice that the player makes, thus giving players more control over the game.

We have here one of the most widely played slots in the history of online slots. Cleopatra is also part of land-based casinos, from Las Vegas to Taj Mahal in Atlantic City. The Cleopatra bonus features simply add additional flair to the gameplay and make the winnings more lucrative to the player. Join any of our affiliate casinos and spin to win the Cleopatra slot.