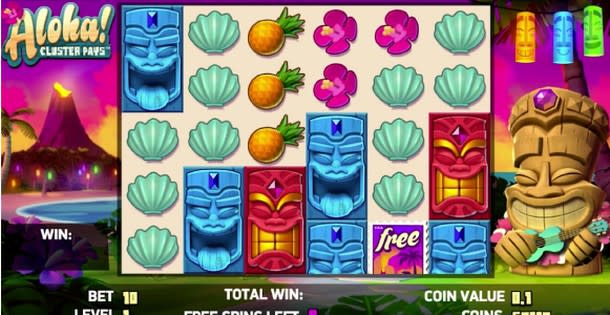 Nine symbols needed for a win

The name Aloha! Cluster Pays slot makes things pretty obvious, and it is clear to see what the basic features and characteristics of this game are – it has a Hawaiian, pacific theme and winning combinations are formed as clusters, not standard paylines.

Aloha! Cluster Pays slot was developed and released by NetEnt, one of the most renowned online slot providers. NetEnt has been creating slots for more than two decades and they have developed 200 games. On average that’s ten games per year, but in the past few years they have been creating more than a dozen games per year and we hope that trend continues. The company currently employs more than 1,000 people and it has branches throughout the world. But, enough about them, let’s talk a bit more about Aloha! Cluster Pays.

The game is quite colourful and bright, but that is to be expected from a game with a Hawaiian theme. On the reels, you will see a lot of flowers and fruits that are native to the Pacific islands, and there are quite a few totems and other figures.

Behind the reels, you will notice a lovely Pacific island, with a picturesque beach and a volcano in the background. A totem is placed to the right of the reels. The music is quite soothing and calm, you’ll almost feel like you’re lying on a sandy Pacific beach.

The symbols become animated when a winning combination occurs and the sound effects are also intensified.

How To Play Aloha! Cluster Pays

There are no standard win lines in Aloha! Cluster Pays, so it’s not surprising that the stake isn’t set on the basis of the number of paylines, you get to choose your total. Still, there is a level field and a coin value field, much like on all other NetEnt slots.

Always consider that the prize of one spin shouldn’t exceed 1% or 2% of your total bankroll. Well, that’s more a general tip, you are free to play with as much as you want. In addition to buttons that you use to decrease or increase your stake, there’s also a play button, as well as autoplay and max bet buttons.

If you have ever played a NetEnt game you will be familiar with the control panel, it features the same buttons and options. The autoplay button gives you plenty of options, you can set the reels to spin up to 1,000 times but bear in mind that all spins will be at the same stake as the amount that was set when you activated the autoplay.

The max bet amount will set the stake to £200 right away, so you won’t have to adjust the bet level and the coin value.

How To Win Aloha! Cluster Pays

As we said, you will need a cluster combination of multiple instances of the same symbol for a win in Aloha! Cluster Pays slot. To be more precise, at least nine symbols should be aligned in a cluster for a win. More symbols in a cluster mean higher wins.

The grid of Aloha! Cluster Pays is five by six, so a total of 30 symbols appear on the reels. Therefore, a winning combination or a cluster can be consisted of up to a maximum of 30 symbols although that’s highly unlikely.

This game features just seven symbols, that means more chances for a winning combination, compared to games where there are a lot more symbols. Even though there are no paylines, you are paid depending on the coin value. For example, if you play with 10 coins, each costs 1p and you hit a winning combination that’s worth 50, you will get a 50p prize.

The fruits pay a lot less than the masks. For example, if you get a winning combination with 30 red masks you will win the highest main game prize which is 10,000 coins. Considering that you could play the game with a coin value higher than £1, there’s a lot of potential for high prices.

And while it isn’t very likely to hit 30 symbols on the reels, you could still win some quite hefty prizes. In addition to standard symbols, there’s also a substation symbol (wild) and it can replace all symbols, except for the scatters.

Aloha! Cluster Pays slot features stacked symbols, and only the masks (symbols of high value) can appear as stacked. The large stacked symbols are counted as double (two symbols), whereas the smaller stacked symbols count as one symbol, but they can only appear during bonus features.

The Free Spins bonus is triggered by three free spins scatters. The symbol drop mechanic feature that is active during free spins removes symbols of low value from the reels, thus giving you a chance for more wins. If you don’t score a win during the last spin, you will be awarded an additional spin, and then under one until your bonus session ends in a win. The number of awarded free spins depends on the number of symbols that trigger the bonus. You can get extra spins if additional free spins symbols appear.

Every cluster win activates the sticky win re-spins feature. It causes all winning symbol to remain in their position while all other symbols spin again. This can result in an even larger winning combination.

A cheerful pacific game with quite unique features, Aloha! Cluster Pays is one of NetEnt’s greatest releases and that really says a lot considering that NetEnt has produced some of the top online slots in the past few years. Aloha! Cluster Pays features an RTP of 96.42%.