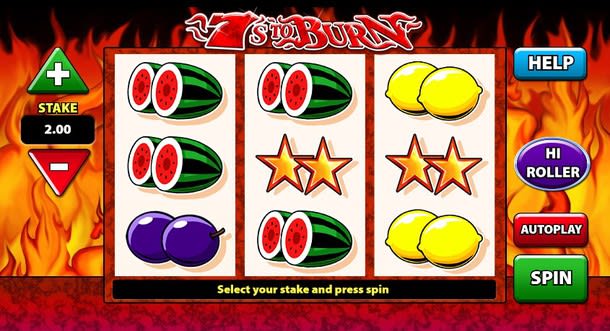 If you have played slots at small gambling parlours or pubs you would be familiar with these simple three-reel slots. The online version of the 7’s to Burn slot is straight to the point. Three reels and five paylines is all it takes for players of any style to enjoy a solid gambling experience. Equipped with Wilds, 7’s to Burn may shake out some hot double sevens in a payline.

7's to Burn online slot is one of the many classic slots that looks the same and plays the same. There is no reason to skip it though, because it is a pretty good online slot nonetheless, offering a classic pokies experience.

There have been few examples of this sort of games being made with three reels and just one payline, but Barcrest, a reputable slots developer, have avoided that nonsense and made it a 5 payline slot. The 7's To Burn slot has a title that calls to mind slots and gambling and that is exactly what the game does. So it is small wonder that you can find this game as an actual physical land-based casino or land-based gambling parlour slot.

Even though anyone could pick any other average online slot and play a more visually engaging game, with more engaging gameplay on account of bonus spins and animated game bonuses, why not take few rounds on a slot machine that belongs to pubs, bookies and similar venues. Come to think of it, it is exactly why these slots are made.

Imagine having the Hansel and Gretel slot at a dive. It would just sit awkwardly in the corner and no one would bat an eye at it. Now, the 7's to Burn slots, has a rocker slash football fan feel to it and that is exactly its audience of players. Is that the case for the online audience, that's hard to tell, but the 7's to Burn slot is online anyway, so why not play it and feel like one of those people who like these sort of gambling machines.

As we astutely suggested in the introduction, this is a regular pokie that doesn't depart from that convention, as if constrained by an international agreement. 7's to Burn slots is what it is and you shouldn't expect anything other than fruits, the BAR symbol, stars, bells and of course, 7's.

Why not recount all the fruits that are diverse enough for anyone to open a fruit stand. There are cherries, oranges, watermelons, plums and lemons. The highest paying symbols in this game are the double sevens, however, the double sevens on fire actually take the cake, because they are wild and because they pay the top prize.

Regarding the design, everything else about this game is clean cut. The reel set is simple and neat and the background is the double sevens but on fire! The rest of the surface is taken by the buttons that are used to set the stake per spin, the Spin button, the Autoplay button, Help and the button for the Hi Roller option.

How to Play 7's to Burn Slot

How to play? Well, that's easy, with five paylines it takes a few clicks to get this thing going. Setting up the stake per spin requires clicking up or down on the arrows that have various amounts in the currency that you are playing with. You can stake £2 or  £3 or  £5 or  £15 or  £0.20 or more, depending on the version of the slot. Truly, in most instances, this isn't a penny slot, but the payouts are not in pennies either.

Looking at the paytable one will notice the amounts that are given, which are impressive to say the least. Amidst the lack, if bonus plays, there is one feature that can spice up the game and take you on a thrilling spin. This is the Hi Roller Bonus. Another option to play, which we can’t consider as a bonus game, is the Gamble option.

Simply put, you push the button that aptly states the name of the bonus and you are immediately given 5 spins during which you get an automatic Wild symbol, that is the 77 on fire symbol that substitutes for all other symbols. This thrilling in 7’s to Burn slots ride costs however more than what you would spend per regular spin, but the chances of landing a winning combination are higher.

This one is straightforward. Like many other slots, there is more gambling fun within the gambling fun. The Gamble option lets you take your winning and gamble it in a game of chance, where you have 50:50 to score right. Guessing whether the card on the flip is red or black can double the amount that has been won and then that amount can be doubled again and again, for up to a number of times, which could lead to a huge sum of cash.

How to Win 7's to Burn Slot

With five reels on the reel-set, you will know when you have won a payout before you even see it. Every triple combination of matching symbols is a win that multiplies your wager. The payouts are listed on the slot. The high paying symbols are the double sevens which pay 100x and the burning sevens which pay the top prize of 250x times the winning wager.

Classic game, few paylines, great payouts. The 7’s To Burn slot is hot and cool at the same time - cool because it’s a cool online or land-based slot, and not cool as in cold for payouts. If you don’t have a place to play it in the physical world, why not launch the 7’s to Burn game in any of our casinos. Just claim your welcome package and get those burning 7’s for the max pay.