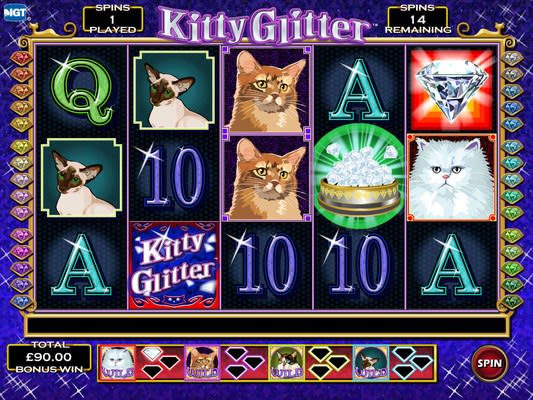 If you like kittens and you like glittery and shiny things, then we won’t have to tell you twice that Kitty Glitter slot could be just the game for you. And it’s really rare to see a game which is so perfectly and completely described by its name – Kitty Glitter is exactly that game. The logo features a gracious white cat and there are plenty more feline friends on the reels.

Even though the game was released back in 2010 it is still quite popular and played at a variety of online slots and bingo sites, including many operators featured on Bingo Scanner. There are few games with a cat theme, but this is the flashiest and shiniest of all. IGT has developed and released Kitty Glitter slot and even though this company has created some pretty exciting games in the past, this game definitely is one of their top products. In fact, Kitty Glitter is one of the more exciting slots in general.

As we said, Kitty Glitter was released in 2010, so the graphics and all visual effects may not look as refined as on recently released games, but the player experience and the overall gameplay are still quite remarkable and can be measured against any of the games that have been released in the past years or even months.

The reels are coloured in celeste and the background is red. The controls are placed at the bottom of the screen, below the reels. That’s pretty much the norm when it comes to IGT games, but even if Kitty Glitter slot is the first IGT game that you play, you will notice that everything is straightforward, and the game is quite user-friendly.

Kitty Glitter slot features five reels, three rows and there are 30 paylines. Again, that’s also a pretty standard setting, and you have the option to decrease the number of active paylines to below 30.

How To Play Kitty Glitter

The minimum stake per line is 1p, so you could play the game with 30p. The maximum amount that you can place is £300, or £10 per payline. Bear in mind, that’s quite a large amount of money for a single spin, so if you feel confident about playing at the maximum stake level, make sure that your bankroll can support that level of wagering.

Speaking of the number of paylines, not every number between one and 30 is available, you can activate one, five, nine, 15 or 30 paylines.

How To Win Kitty Glitter

In order to win the Kitty Glitter slot, you must get at least three instances of the same symbol across an active payline. If the payline isn’t active you won’t get anything, even if there are five symbols across the line, and that’s one of the reasons why we advise you to play with all active paylines.

Another requirement is for the symbols to be arranged from the leftmost towards the rightmost reel. Otherwise, the payline wouldn’t be activated.

Kitty Glitter slot features themed cat symbols and standard card symbols. Card symbols have low value, so if you’re looking for a more substantial win you will need to get multiple instances of the same cat. There’s one fluffy white kitten which is also featured on the game logo and this is the most valuable symbol, it pays 1,000 coins for a combination of five symbols. So, if you play with a coin value of £10, you would get a total of £10,000 for this combination and that’s the highest prize in the main game.

The Free Spins round is the main bonus feature that can be activated in Kitty Glitter slot. The scatter symbol, which in this game is a cat bowl, activates the free spins bonus. A minimum of three symbols is required to trigger this bonus.

When the free spins bonus is activated you will get 15 free spins. Three symbols activate the bonus feature, but they will also award you a prize worth three times your wager.

A special diamond symbol appears on the reels during the free spins bonus game. If you get a diamond on the last reel some of the symbols will turn into wilds. These newly generated wilds will appear on all reels bar the first reel and they can replace all Kitty Glitter symbols except for the mentioned diamond and the cat bowl scatters.

As it is usually the case, the spins are played at the same stake as the original spin that triggered them. The free spins feature can be retriggered, but not more than 225 spins can be awarded.

If you’re into online slots and adorable kittens, there are lots of bingo sites with Kitty Glitter where you can play this highly entertaining game.

To continue the feline theme, there’s Kitty Bingo offering you some free sign up bonuses as well as details of ticket prices for all games.

Paddy Power Bingo is an online bingo site from the people behind Ireland’s biggest bookmaking company and one of the internet’s biggest online betting providers. The site offers a handy ‘Getting Started’ guide that will lead you through the steps of registering, funding your online bingo account and playing the games.

Ladbrokes Bingo offers many gaming and betting opportunities complete with access to a number of games from your mobile devices. There are some generous deposit bonuses when you deposit for the first time.

Kitty Glitter is a fun and exciting game. Even though it was released quite a while ago, Kitty Glitter still attracts plenty of players and casinos and bingo sites still keep it in their libraries.

Although there is just one bonus feature, you could get up to a maximum of 225 free spins.

The game offers a magnificent in-game jackpot worth 1,000 coins and the wagering limits are quite flexible which makes Kitty Glitter appropriate both for new players, as well as for the experienced ones