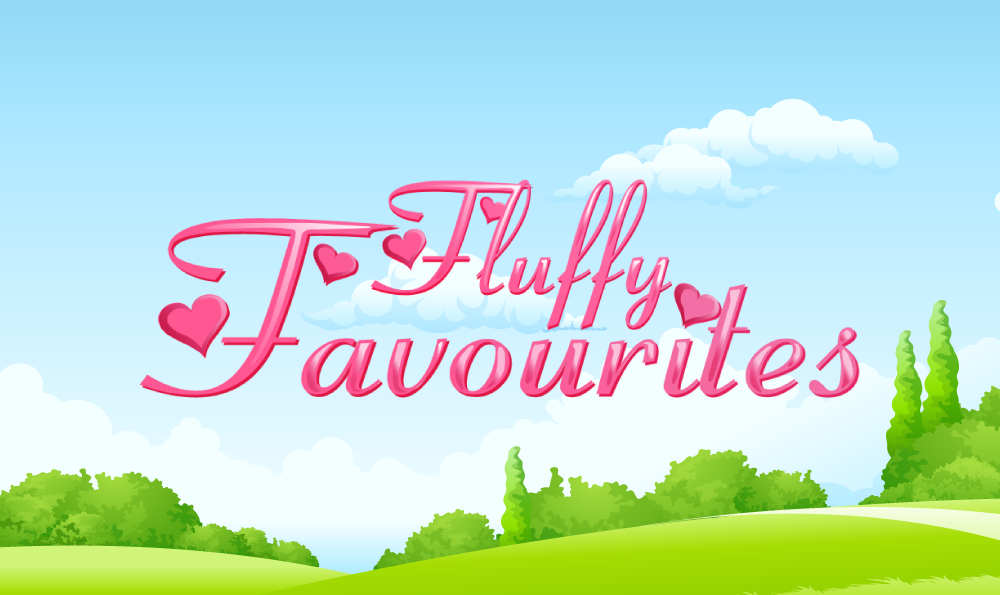 RTP could be higher

Eyecon might not be one of the largest or most renowned online slot developers, but this company has sure developed its fair share of popular slots over the years. Fluffy Favourites slots sure enters the list of the best Eyecon slots, and not just that, this game can be measured against some of the best slot games in general. The game name completely describes the central theme in this case, you will certainly find your favourite fluffy animals on the reels of Fluffy Favourites slot, so try to hit a valuable winning combination preferably the purple hippo which is the most valuable in game symbol.

If you like colourful games you surely won’t be disappointed by Fluffy Favourites, since it is hard to find a colour on the spectre which is not featured in this game, either on one of the symbols or around the reels. You will even notice a rainbow in the background, behind the reels.

The symbols in this game are all fluffy animals, there are no symbols that aren’t somehow connected to the theme. The reels are placed on a green field and you will see the Sun and a tent in the background, in addition to the rainbow. The words Fluffy Favourites in pink are written over the reels.

When it comes to the music and the sound effects, they are quite intense, so you may wish to decrease the volume, especially if you have headphones on. The control panel is quite simple and user-friendly, there are only few buttons and all of them are clearly visible below the reels.

How To Play Fluffy Favourites Slots

You will notice few coins staked one on top of the other right next to the play button and this is where you can set your wager. Fluffy Favourites slot features 25 paylines, but you may choose which paylines you want to activate, i.e. how many active paylines you like to play on. You can activate as little as one payline, but in that case you will win only if a combination is formed across that particular payline.

So, if you decrease the number of paylines you will also significantly decrease your chances of winning and that is why we don’t recommend you decrease the number of active paylines. If you wish to play at a lower stake rate, then it is much better to wager just one penny or two pence per payline, in which case the overall stake would be either 25p, or 50p. That’s still not a lot of money, and you will have a lot more chances of winning. The maximum bet per payline is limited to 50p, which means that the overall stake would be just £12.50.

If you like to toggle the sound off completely click the sound button placed left of the coins button. On the other side of the spin button you will notice the autoplay button and if you press that button you could choose if you want to set the reels to spin ten, 20, 50 or 100 times.

How to Win Fluffy Favourites Slot

Although all symbols are thematic, not all of them are of equal value, some symbols yield much bigger wins compared to the lower valued symbols. Plus, with the more valuable symbols you need just two across a payline for a win, whereas with the symbols of lower value you will need at least three for a winning combination.

First we have fish similar to the ones you can see in Finding Nemo, next there’s a yellow duck, a blue rhino, a giraffe, a tortoise, a lion, a panda, a bear, a dinosaur with wings and a purple hippo. You will win just five coins for a combination of three of the lower valued symbols, but for four symbols you will win either 15 or 30 coins.

The panda, the money, the dinosaur and the hippo pay from two up to ten coins for a combination of just two symbols. Bear in mind that the symbols have to be aligned from the leftmost towards the rightmost reel, so if you symbols are placed on the second, third and fourth reel, no payout will be awarded.

If you are fortunate enough to hit a winning combination consisted of five pandas, monkeys, dinosaurs or hippos you are in for a treat as you will win from 500 coins for pandas and monkeys, up to 5,000 coins for the hippo. The dinosaur pays 1,000 coins for a combo of five.

A pink elephant plays the role of a wild and a scatter symbol. It can substitute for any symbol, except for the second bonus symbol and if a winning combination includes the elephant, the winnings will be doubled.

There are two bonus features that you can activate in Fluffy Favourites slots. The free games are activated when you get at least three elephant symbols. Three elephants award 15 free spins, four symbols generate 20 free spins and if you are lucky enough to get five elephants you will get to play 25 free spins.

The claw is the second bonus symbol, and it activates the Toybox Pick. This bonus is activated when at least three claws appear on the reels. You will be awarded one pick per claw and a pick can award a maximum of 100 times your total wager. So, if you play the game with £12.50, you can win up to £1,250 with just one pick. All your pick winnings are combined and payed out at the end of the feature.

The Fluffy Favourites RTP has been set at 95.30% and this reflects the percentage for the payback probability in an undetermined period of play. This Return to Player probability is solid, in consideration of many other slots which are below the 95.00% mark. Unlike online casinos, land-based casinos have much lower RTP outcomes which results in fewer wins for the players. In the case of online slots, the RTP is higher and that means more frequent winnings, which may pave the way towards the jackpot or the biggest cash prize of the game that you are playing. In that respect, Fluffy Favourites RTP is a good reason for playing this online slot.

There is a reason why we suggest you play the demo version of Fluffy Favourites Slot before the actual game.

The Fluffy Favourites Demo is pretty much the same as the original version – it has the same number of reels and paylines, the same frequency of winning combinations, same symbols and same bonus features. The only difference is that in the demo version you are playing the slot with credits given to you from the site you are playing at, and they are usually infinite, while in the original game you are spinning with your own cash.

The main reason behind playing with demo credits first is to get used to the game, the spin, the symbols and to see how everything works. Instead of investing your money to learn how the game is like in the first 20 spins, you can play a demo version of the same.

Don’t forget to switch back to the original version after you feel comfortable, as that’s what slots are all about.

All bingo sites with Fluffy Favourites on our list are well-rounded bingo sites which provide various options for players of all kinds of online casino games. All of them offer such gaming options as slots, video slots, table games, live casino, and more. Each new customer at these bingo sites is greeted with an excellent welcome bonus consisting of various combinations of free spins, deposit bonuses, or free roulette chips to give them a more enjoyable stay and a chance of landing some win.

Established in 1988, Paddy Power site is almost always one of the top picks when it comes to bingo sites with Fluffy Favourites online video slot. Their site is constantly growing to include numerous casinos consisting of every possible bet channel one can think of, with sites including great games like Fluffy Favourites. Paddy Power’s design will most definitely keep you on their site and entertained, while the lavishing welcome bonuses are more than welcome, and with the in-game free spins other extras, it is more than certain that you will have chances of landing a win.

Our second choice on our list of bingo sites with Fluffy Favourites is Moon Bingo which is a brand owned by Daub Alderney Limited. The gaming services on this bingo site are operated by members of the 888 group which has headquarters in Gibraltar and holds a Gibraltar gaming license and is licensed and regulated by the Great Britain Gaming Commission. All games at Moon Bingo are audited and tested to ensure fair play and honest payouts.

Betfair group is among the world’s biggest online betting sites and bookmakers. It was founded in 2000 by Andrew Black and Edward Wray with its headquarters in Hammersmith in West London, England. Betfair’s betting exchange is operated under Gibraltar licence as of March 2011. In Feb 2016, they decided to enter a partnership with Paddy Power to create Paddy Power Betfair which is another subsidiary of Betfair.

Fluffy Favourites slot is among the most playable games, and its cheerful and jazzy symbols, great bonus features and low stake limit sure attract a lot of players. The game is available at many bingo and slots sites, and you can win a maximum of 5,000 coins. Very few games feature in-game jackpots which as high as that.